A contact signed this week between Cumbria County Council and BT, part of a project also supported by the government and by the EU, will bring superfast broadband to Cumbria.

The contract was signed at Ullswater by Councillor Liz Mallinson on behalf of Cumbria C.C. and Bill Murphy for BT (left) in the presence of Rory Stewart, MP for Penrith & the Border (centre), who has campaigned for action to bring faster broadband to areas like Cumbria. 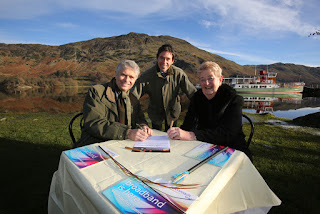 This contract is part of the Government’s Broadband Delivery UK (BDUK) programme – and will mean super-fast broadband will become available to around 93 per cent of homes and businesses in Cumbria by the end of 2015.
Bill Murphy, BT’s managing director for next generation access, said: “Cumbria’s scattered population combined with its comparatively large size and challenging geography, means that small business plays a pivotal role in the county’s economy and the rollout of fibre broadband will act as an economic driver for those rural businesses.
“The statistics show that in Cumbria, something like 7,000 businesses operate from villages, hamlets and isolated properties, which is why BT is committed to helping push fibre to those that are hardest to reach, offering a helping hand to the small community projects where residents are helping to build their own superfast connections.”
Cumbria is expected to be one of the first areas to benefit from the European Union decision to grant state aid approval for the government’s national broadband rollout.
Once government approval for state aid and confirmation of EU Major Project status is given, it means that government and european funding for the project can be released, allowing the project to begin quickly.
Communications Minister Ed Vaizey said: “Today’s announcement is fantastic news for Cumbria and I’m pleased that one of the first areas to benefit from the Government’s Rural Broadband Project is, in fact, one of the most rural regions in England.
"This multi-million scheme will provide Cumbrian residents with some of the fastest broadband speeds available in the UK by 2015.”
Notes
This is a multi-million pound contract, of which the funding includes
* £17.1m from the government via BDUK,
* £13.7m from the European Regional Development Fund,
* £5m through the Performance Reward Grant from all councils in Cumbria
There will also be a significant direct investment by BT itself
According to Ofcom, Cumbria’s average downstream speed is currently 7.1Mbps, while 18.8 per cent of the population receive less than 2Mbps
The project will enable a range of ISPs to offer speeds of up to 80Mbps to a majority of the county’s homes and businesses by the end of 2015. Fibre-to-the-Premise technology – delivering speeds of up to 330Mbps – will also be available
Premises in the remaining seven per cent who currently have very poor internet speeds will also see an uplift – the project aims to deliver a minimum of 2Mbps or more to almost all homes and businesses.
Source for the information in this blog post: BT news release.
Posted by Chris Whiteside at 7:15 pm

Great presentation.
Thanks for sharing this idea interesting blog, Please continue this great work.really help me lot in that. Thanks for publishing :)
Rusty Solomon

I welcome Fibre optic technology in Cumbria. Really I do, and I will no doubt be one of the first to sign up to it.

Just a nice friendly reminder to all your readers on the funding:

* £17.1m from the government via BDUK,
* £13.7m from the European Regional Development Fund,
* £5m through the Performance Reward Grant from all councils in Cumbria

All of this equates to the truth doesn't it thats £35.8m from the tax payer (plus a lot in government costs)

Let me sum up goverment and EU grants with a simple example.

Its like me quietly filling a 40gallon drum from one side of Ennerdale lake, Carrying it around to the other side, spilling a lot of it on the way, then pouring whats left into the other side of the lake, whilst making a great song and dance about how much I am raising the water level.