Nothing is capable of surprising me any more that Cumbria County Council does in relation to the West Cumbria Mining planning application.

The statement from county council officers yesterday which they have placed in the public domain reads as follows:

Cumbria County Council has submitted a statement of case on the 5th May in line with the requirements of the public inquiry and is committed to supporting the planning inspector to determine the application."

That "statement of case" appears to have been submitted on the last available day before the expiry of the deadline - e.g. yesterday - and the news started to leak out midway through yesterday, which was of course also polling day for the local elections. The news started to come out after some people had voted but while polling stations for a number of elections including four county council by-elections were still open.

Councillors, including myself and members of the DC&R planning committee were notified by email yesterday afternoon of what had been submitted after the event and told that the submission was being sent to us in confidence and we could not share it.

So I'm not going to share the document, but it has leaked out and reports have been published in local news sources that the county council has declared itself neutral in the planning appeal.

Since this is already in the public domain I cannot see any point in pretending not to know whether that report is correct. It is.

I have two issues with this decision and the way it was done.

All three votes were cross-party - the first two votes were unanimous, the most recent one was by a three to one margin. which included a majorities of votes cast by council members from each of the three major political groups and an Independent, with councillors from all over Cumbria voting in favour.

To ignore the position taken through a due and exhaustive process by the overwhelming majority of elected councillors on the relevant committee without making any attempt to consult most if any of them until after the fact makes a nonsense of any claim by the council to be acting as a democratic representative body.

I have recorded an interview with ITV Border news and a brief clip from the interview was broadcast at about 6.15pm on the 6pm local news programme this evening.

This picture of a sign near a polling station was being shared yesterday, sometimes as a joke about the Liberal Democrats but, frankly, it applies even more strongly to the present administration on Cumbria County Council. 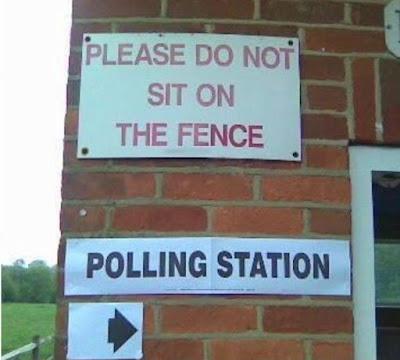 Posted by Chris Whiteside at 12:30 pm

I'm not sure that WCM left the responsible officer with any choice when they responded to her decision to put the application back before DC&R by instructing Hogan Lovells to apply for a Judicial Review.

We will have to agree to disagree about that.