A thank you to Sir Robert Atkins MEP

The ballot papers will have dropped through the letter box of Conservative members in the North West yesterday and today to rank Conservative candidates in this region for next year's European elections.

Incidentally, if you are a fully-paid up Conservative party member and have been for three months, and don't get your ballot papers for the ranking of MEP candidates in the next week, you should raise the issue, initially with your local Conservative office.

Obviously a lot of attention will have been paid to people who are standing, but I want to take the opportunity of saying thank you to someone who isn't: one of the three sitting MEPs, Sir Robert Atkins, is standing down at next year's election.

As chairman of Cumbria Conservatives I have been grateful for support from all three of the sitting Euro-MPs: Saj Karim and Jackie Foster have also supported us. But today I want to say a particular thank you to Sir Robert for his unfailing support.

In this year's County Council elections Sir Robert made around eight visits to support Conservative candidates in Cumbria, visiting all but one of the constituencies in the county, including several where we chalked up narrow wins. He also found time to support us in the PCC elections last year despite the fact that his daughter was standing at the other end of the country.

The picture below was taken in Bransty Ward, Whitehaven when Sir Robert (left!) came to support me in 2010.

Robert, thanks for all your support. 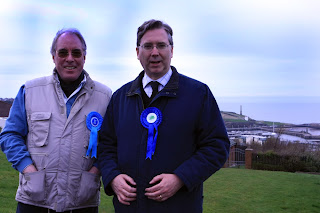 Posted by Chris Whiteside at 7:35 am