Preliminary Official figures released today suggest that the British economy has finally recovered to the output levels prior to the crash of 2008.

It has been a difficult few years, and the pain is not over yet. But at last the enormous economic damage which took place on the last government's watch is being reversed. There is a long way to go, but the government's long-term economic plan is working.

On an annual basis gross domestic product (GDP) expanded by 3.1%.

The figures show the economy is now worth 0.2% more than it was at its peak in 2008, the Office for National Statistics (ONS) said.

The UK economy is forecast to be the fastest growing among the G7 developed nations, according to the International Monetary Fund (IMF).

On Thursday, the IMF predicted the UK would expand by 3.2% this year, up from a previous forecast of 2.8%.

Chancellor George Osborne said: "Thanks to the hard work of the British people, today we reach a major milestone in our long-term economic plan." 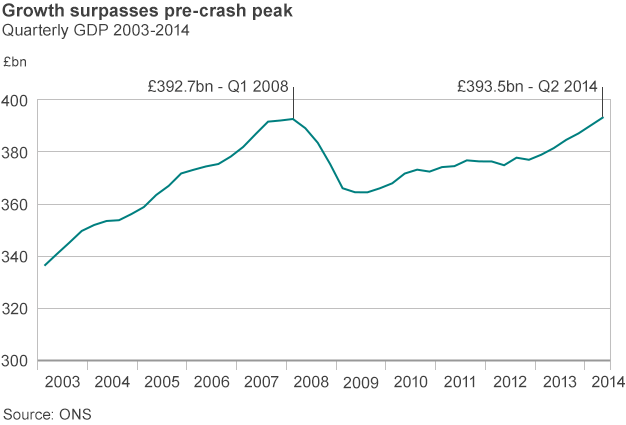 Let me tell you my working life story. All will become clear as to why at the end of this comment.

I left school at age 16- hated school, the mr and mrs thing and assumed authority always annoyed me.

done my A levels biology, Applied Mathematics and physics at workington college.

Then I spent 3 years cutting stone and working in a quarry (Quarry stone from Wilton, cut it in Bigrigg) got sick of being cold and wet all the time so drastically joined the Air Force to retrain as an Electrical engineer, did that, then another few years in a blue suit as payback.

Then i hung up the blue suit and started work as a photocopy engineeer of all things to get my foot in the door as it were. done 3 years of that, and that was different. then I applied for a higher paid job, and got it.

so please can you explain to me why oh why, now people are working and output is getting so much better has the tax bill risen so much?
If people were just left alone to reap that which they sow, then the economy would boom & the deficit would be none existent.

I have a little plaque in my new kitchen it reads "you dont always get what you wish for, you get what you work for" but then i think when you do work for it and get it then the government only try to steal it from you. I thought is was bad under the last lot, but after 4 years of this lot, they are doing precious little to change my opinion.

There are a lot of reasons why we are paying so much in tax. One of them is to pay the horrendous cost of interest to service thed debt on the billions of pounds borrowed over the past decade.

Which is why it is so important to finish the job of cutting the defecit - down by a third since the present government came in but we need to wipe it out altogether and start paying money back.

The crux of the matter is that the basic fundamentals of the current economy are as rotten if not more so than they were in 2007. The deficit reductions look good at first glance but then once you see past the clever accounting tricks of shifting pension liabilities and double counting of favings, you soon figure out its wildly out of control. the debt stands at £1.5 trillion. Just to show how much that is, as people just dont lend themselves to billions let alone trillions, if we paid it back with no intrest at A million quid a day, it would take over 4000 years to repay it, if at the time of christ they had this level of debt, and started to pay it back then at a million quid a day then only half of the bill would currently be paid.

Pensions are another thing, there once was a time when if you saved and put savings into a pension you could be assured of a comfortable retirement, these days the only people with any sort of pension security are the public sector, and thats not due to savings, thats due the government running a huge ponzi scheme.

I am almost 40 and I have no idea when i will retire, but im pretty sure i will still be working past 65. As for the 25 ish year olds at work, well who knows.

As for public spending well I think "Yes Minister" nailed that one ""The Treasury does not work out what it needs and then think how to raise the money. It pitches for as much as it can get away with and then thinks how to spend it."