Hundreds of parachutists from Britain, the USA, Holland and Poland took part in a parachute drop today to mark the 75th anniversary of Operation Market Garden, and to commemorate the bravery of all those who took part in that operation, particularly those who lost their lives. 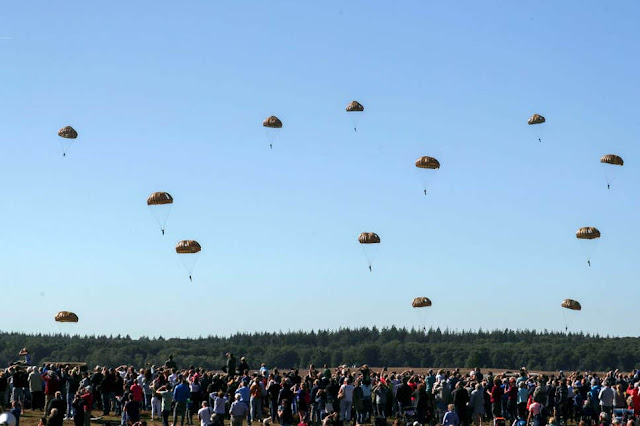 Had it been successful the operation would have bypassed the Siegfried line and given the Allied Armies a clear invasion route over the Rhine and into Germany.

Operation Market Garden has become associated with the words which General Bob Browning used when the plan was first proposed and from which both for a book by Cornelius Ryan and a Richard Attenborough film took their titles:

"Sir, I think we may be going a bridge too far."

Rommel once described the difference between a bold operation and a gamble as follows:

"A bold operation is one in which success is not a certainty but which in case of failure leaves one with sufficient forces in hand to cope with whatever situation may arise. A gamble, on the other hand, is an operation which can lead either to victory or to the complete destruction of one's force."

On that basis Operation Market Garden was a bold operation which thank to the bravery of a great many good men came tantalisingly close to success, but didn't quite come off.

I later knew two men who had served in the 1st Airborne division at the time of the Battle of Arnhem, neither of whom, sadly, are still with us. One was Captain Geoffrey Brown who was one of my teachers at school and later my Deputy Chairman (Political) when I was a constituency chairman. The other, Ron Wigley, was my uncle. I have been thinking of them today.
Posted by Chris Whiteside at 4:11 pm