"The Economist" on Climate change

The Economist this week has a very good summary of the historical evidence about how the very developments which have greatly improved the quality of life for millions of people have also released millions of tons of carbon dioxide into the atmosphere and created a huge challenge for our future. 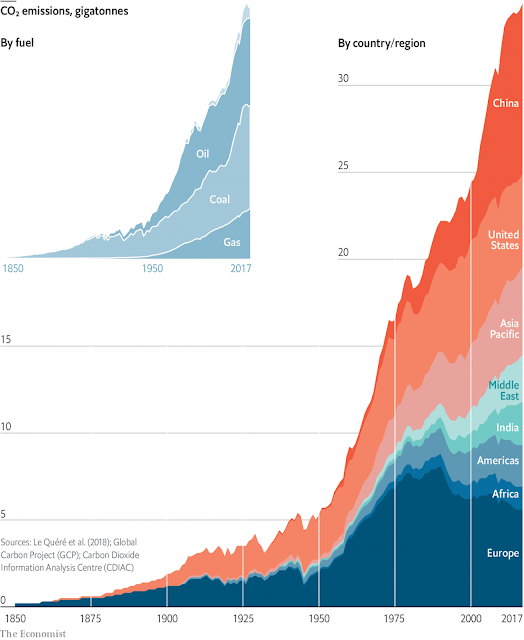 The article also discusses possible solutions, pathways for the future and the extent of the challenge of achieving them.

The article may annoy some climate change sceptics by arguing that the case for man-made climate change is proved. Personally I don't think we understand the Earth's fantastically complex ecosystem as well as we think we do, but the trouble is, "Has this been proved?" is not actually the right question.

The question we should actually be asking ourselves is not "Has the case that human actions are affecting the climate been proved beyond reasonable doubt?"

It is "Is there enough evidence that we are affecting the Earth's climate to demonstrate a significant danger that continuing on our present course of action could have catastrophic consequences?"

And, I'm afraid, you don't have to sign up to everything that the climate lobby say, to believe that we fully understand the Earth's ecosystem or to regard the case for man-made climate change as proved to realise that the answer to that question is almost certainly YES.

That's why I believe we have to take action to reduce carbon emissions both in Britain and throughout the world.

The Economist's article is called

"Global warming 101, The past, present and future of climate change/"

It is behind a paywall but if you are not a subscriber you can still register to read five three articles per month.

You can find the article here.
Posted by Chris Whiteside at 11:41 pm