Children in English schools who are in reception and years One and Two are entitled to free school meals and neither the government or anyone else is proposing to change this.

Under the plans for rollout of Universal Credit the Conservative government is changing planned eligibility for free school meals for children in year three and above in a manner which INCREASES the total number of children who will be eligible for them compared with the previous benefits system and to focus provision more accurately on those most in need.

No child who is currently able to obtain free school meals under Universal Credit will lose that benefit.

Since 2013, the government has been rolling out Universal Credit, replacing the old benefits system. Some areas, like Croydon, have already switched; others are still waiting.

As an interim measure to ease the transition, the government has relaxed the eligibility rules for those affected by the rollout of Universal Credit so that during that rollout all families receiving Universal Credit are entitled to free school meals, regardless of income or hours worked.

It was never promised that this interim measure would be permanent, and the government recently announced that a means test will be introduced for new claimants. This will be based on the amount earned from work rather than the number of hours worked because this is likely to be a fairer measure of need.

And I repeat, the means test is for new claimants and those children who get free school meals under the interim rollout arrangements will remain eligible for them rather than be means tested.

It is expected that compared with the old benefit system, by 2022 the test based on money earned will mean that 210k children whose parents are working more than 16/24 hours a week will qualify for free school meals who would not previously have been eligible, while 160k children, mostly those whose parents work fewer hours but earn more than the new financial threshold, will not.

However, in response to Labour's allegations it was pointed out, and not just by Conservatives, that 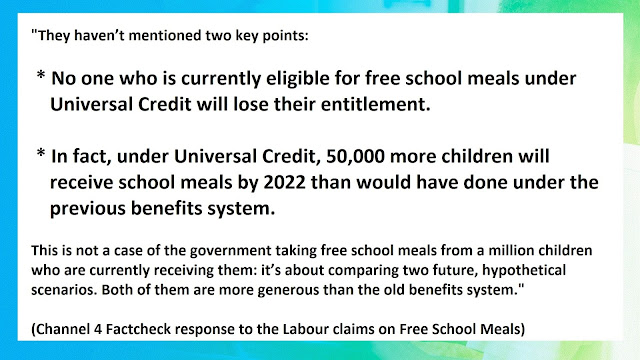 The quote in the graphic above and indeed almost everything I have written above does NOT come from a government or Conservative party source. The statement immediately above is a direct quote from a Channel 4 Factcheck investigation into the Labour party accusations against the government on this subject, as you can confirm for yourself by following the link here.

Almost everything else I have written in this post can be confirmed from the same source.

Following the publication of a IFS report - which confirms the estimate that 50,000 more children will be eligible for free school meals under the new system than the old one but gives more detail on winners and losers - Labour's shadow education secretary has been attacking the government using a different selective presentation of the facts.

Here is an IFS graphic showing the winners and losers (and that there are 50,000 more children who gain entitlement to free school meals than lose them.) 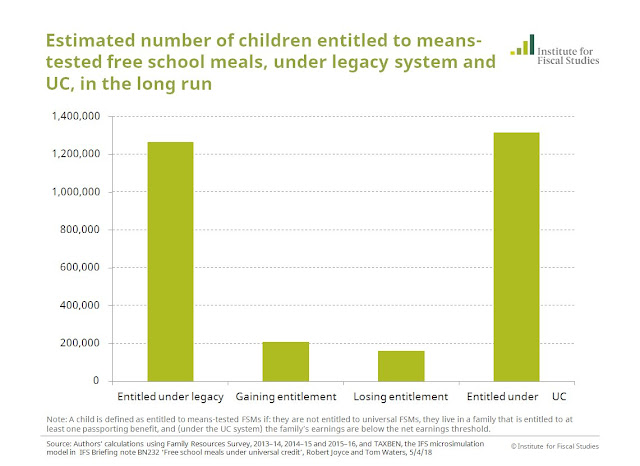 You never please everyone when you try to target benefits more accurately - there is an old saying that the government which robs Peter to pay Paul can always rely on the support of Paul while the opposition gets Peter's vote - but please, can we try to have a grown-up discussion about the whole picture and not just an exchange of highly selective quotes?
Posted by Chris Whiteside at 2:49 pm