Thoughs on Amber Rudd's resignation and the Windrush affair

I suspect that Amber Rudd could have survived as Home Secretary because polling evidence suggests that the public did not see her as the main culprit for the poor treatment of the "Windrush Generation" and continues to support the policies which, through wrongly applied, led to that poor treatment.

I also suspect that Matthew Parris is quite right when he argues here that it is most unlikely that she deliberately lied to parliament.

I suspect the most likely explanation for the apparent discrepancy between her statements about whether the Home office had targets for the removal of illegal immigrants and the documents which have been produced is human error - even those people with the best memories sometimes misremember things.

Nevertheless, although Amber Rudd has made a big contribution to the government and has a lot still to offer, I think she probably made the right decision to resign.

I also have a lot of time for Sajid Javid and I hope and believe that he will improve the functioning of the Home Office, a department which still appears to have serious problems.

Let me quote some polling evidence to back up the comments I made in the first paragraph of this piece.

A very recent YouGov poll - fieldwork 24-25 April so taken after the Windrush scandal broke - suggests that a majority of the public still want a reduction in the overall level of immigration. 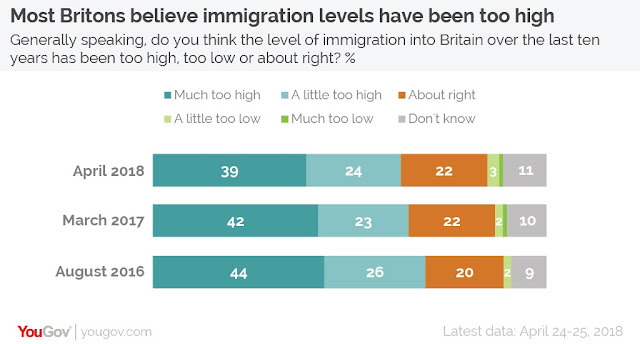 However, that does not mean that the public is opposed to all immigration. There are some categories of immigrants - particularly categories such as people who are coming to work in the NHS or people with scarce skills - who the public welcome. 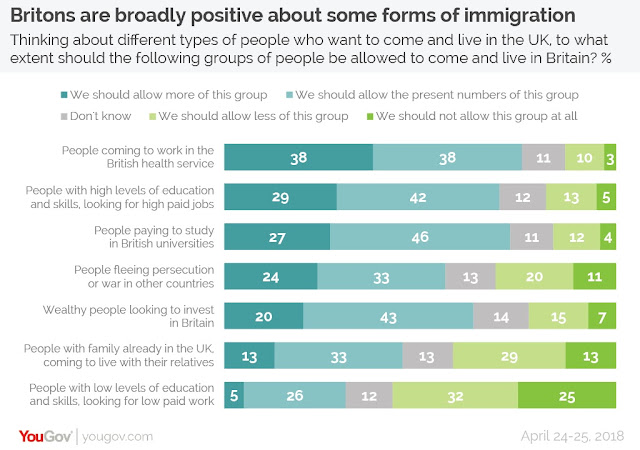 This is what voters said when asked under what circumstance people should have to produce documents proving who they are:

In my humble opinion these views are reasonable even though I do not go along 100% with all of them, and I think Sajid Javid was right in one of his first acts as the new Home Secretary to drop the language of a "hostile environment.

We should avoid the trap of thinking that everyone with concerns about immigration is racist or xenophobic.

Implementing a policy of cracking down on the real illegal immigrants without ever making life difficult for anyone legally here is easier said than done. But it must be attempted.

No one said it was easy, but if you repeatedly ignore the warnings no one is surprised when it all goes wrong

Well, ultimately if you do not act on warnings and things go wrong you have to accept responsibility, and Amber Rudd has done the honourable thing, accepted responsibility and resigned.