Another week, another set of resignations from Labour

Racism in all forms is wrong, whether it is directed against Jews, Muslims, those of any particular skin colour, or anyone else.

It is my perception that both anti-Semitism and prejudice against Muslims are on the rise in Britain, and all political parties need to avoid complacency in guarding against both, but I don't think any party has as serious a problem with any form of racism as Labour has with anti-Semitism.

There have been more powerful articles in the press this week from people who have resigned from the Labour party over anti-Semitism. Jane Merrick writes in The Times about her decision to leave Labour. Those who are subscribers or have registered for two free articles a week can read her article here. 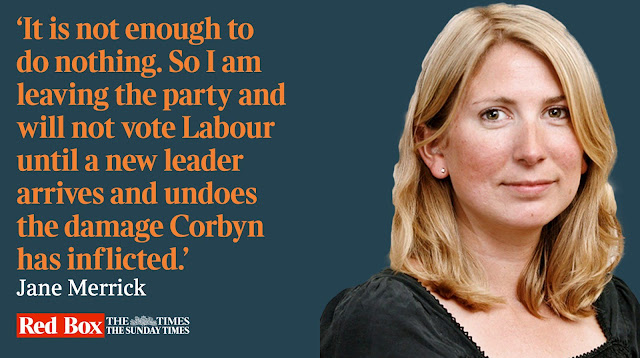 And Martin Bright has a similar article in the Jewish Chronicle here.

Brendan O'Neill writes in Spiked that he believes "Labour's problem with Jews is getting worse."

I repeat that no party can afford to be complacent about this. We must all refuse to descend to "Whataboutery," the response when someone raises an allegation of racism against one's one party of saying "What about" and accusing another party of racism instead of dealing with the issue.

E.g. the manner in which too many socialists have avoided addressing the problem with racism in the Labour party has been the "Whataboutery" of accusing the Conservatives of racism (usually, at the moment, Islamophobia) instead of asking themselves whether they might actually have a problem.

I don't accept for a second that the Conservatives actually have remotely as serious a problem with Islamophobia or any other form of racial prejudice as the Labour party currently has with Anti-Semitism but we do need to ensure that cases of prejudice which do emerge in every party from time to time are firmly dealt with in a way which makes clear that they are not acceptable.
Posted by Chris Whiteside at 3:20 pm