Today, 31st October, is All Hallow's Eve (the day before All Saints Day) which is usually shortened to Halloween.

In medieval times there was an important three-day festival called "Allhallowtide" in the Christian calendar. It would be easy to conclude that the only thing from either the pagan festivals which were once held at this time of year, or Christian festivals either, which retains any significant impact on the popular consciousness are the name "Halloween" for the first day of that festival and a humorous "celebration" of ghosts, witches and demons which are essentially a parody of the way medieval Christian propagandists depicted the previous pagan festival.

It is often alleged that at this time of year the pre-Christian religions originally held a great Pagan festival and that "Allhallowtide" represented this beingco-opted by the early Christian church.
However, when you start looking into the historical evidence it becomes clear that things are a bit more complicated.
Judeo-Christian traditions commemorating the dead go back thousands of years, pre-dating the life of Jesus and described in the Old Testament (See 2 Maccabees 12:42–46.) Different Christian traditions commemorate the dead in different ways and on different dates although all of them do something to commemorate the departed and most of them have such a commemoration about this time of year.
In terms of pagan rites, there was indeed an ancient Celtic festival marking the Autumn equinox, on 1st November, known as Samhain.
To Catholics, who do not believe that most of those who eventually get to Heaven can go straight there, having to go through a process called "Purgatory" first, Halloween was a vigil before the main feasts of All Saints' Day on 1st November, when the saints in heaven are commemorated, and All Souls' Day, usually on 2nd November (in some countries and traditions it is put back a day to Monday 3rd November when the second day in November is a Sunday) is a day for prayer for all the dead including those who are not yet in heaven and may be in Purgatory on their way there. In some countries the Catholic church also refers to All Souls' Day as the Day of the Dead.
Allhallowtide is the combined festival consisting of all three days.
The Church of England, like many protestant denominations, does not have the same doctrines around Purgatory but does pray for the dead on All Saints' Day and All Souls' Day without making the same theological distinction between the two.
Most human cultures have had some sort of celebration to mark both Solstices and both equinoxes -even if it's only changing the clocks to shift from British Summer Time and Greenwich Mean Time, or the equivalent. (Of course, now we mostly use phones to tell the time and they change automatically). Most cultures have also had some form of commemoration of the dead.
I d not personally buy into the "The Catholics set it up this way to sabotage the pagans" narrative but I do think that elements of both have entered into the peculiar modern tradition of Halloween. 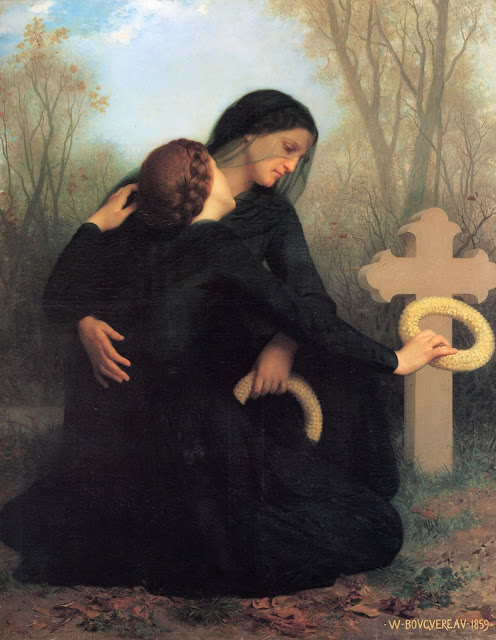 (All Soul's day, a painting by W. A. Bouguereau)

I do regret that over the past 20 years we have ditched the traditional British "Penny for the Guy" for an unfortunate imported version of the American "Trick or Treat" practice. In the USA it's only very small children who take part in "Trick or Treat" and usually with their parents or older siblings watching from a safe distance, and hence it avoids the appearance,  which can often arise in this country when teenagers call on pensioners, of demanding money with menaces.

It is also a problem that the presence of a big bowl of sweets by the front door so as to have something to offer "trick or treat" callers can play merry hell with the diet!


N.B. One of the town and borough councillors in my division, Karl "Whammo" Walmsley from Mirehouse, has made the very good point that for road safety reasons, when children are going around doing "Trick or Treat" in the dark they should make sure their costumes are not all in black or dark colours only - wear something white or carry a glowstick or light. We absolutely do not want Halloween to lead to any extra funerals held sixty years early!

Here is Cumbria Police's advice for a safe Halloween 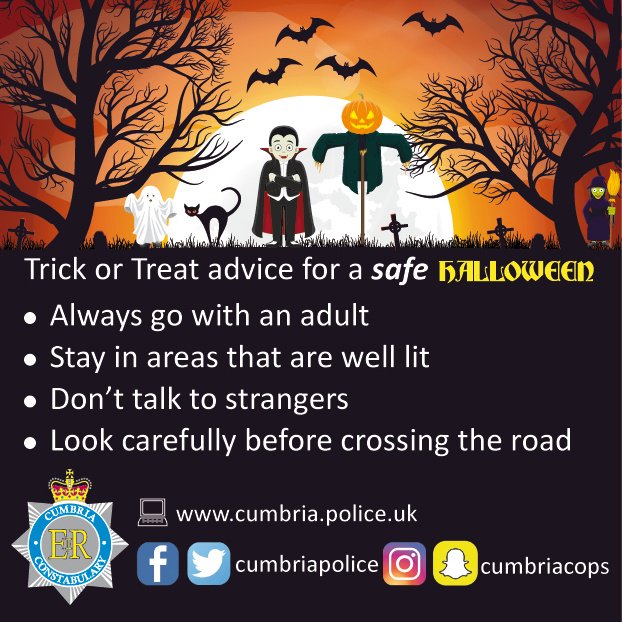 To anyone reading this who is remembering loved ones who have died over the next three days, I will remember both you and your loved ones in my prayers.
Posted by Chris Whiteside at 9:29 am