Standing up against Anti-Semitism is not just about the Jews

Britain is experiencing a significant rise in overt and covert racism, in which Anti-Semitism is the first leading indicator and Anti-Muslim prejudice not far behind.

When I successfully proposed that Cumbria County Council should adopt the IHRA definition of Anti-Semitism both I and my seconder, Sol Wielkopolski, bent over backwards to do so in a constructive way and avoid point-scoring.

That wasn't because either of us has a problem with pointing to Labour's Anti-Semitism problem when it is appropriate. During the coming General Election there will be times when it will be  appropriate to refer to this issue and I will make no apology for doing so. However, there are times when you make that sort of point and times when you don't and while you are trying to get an important motion through a hung council is one of the times when you don't.

Claudia Mendoza, who is Director of Policy and Public Affairs at the Jewish Leadership Council, has a very important article in this week's Jewish News UK on the subject. It makes the important point, put by John Mann who was elected to the parliament which is just coming to an end as a Labour MP but is becoming a crossbench peer instead, that fighting Anti-Semitism isn't just about the Jews. What starts with attacks on the Jews goes on to affect everyone.

The JLC have put a scan of the article on Twitter so they obviously intend people to share that image, and here it is. 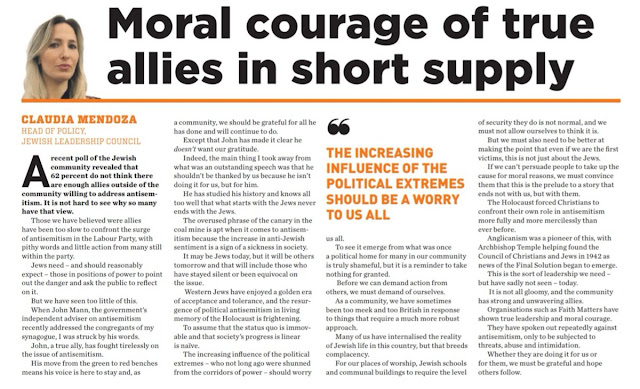 Posted by Chris Whiteside at 7:45 pm