Not a real magazine cover - but a powerful piece of art

The image below has gone viral, and some people have made the mistake of assuming that it is a real Time magazine cover.

A graphic designer called Patrick Mulder has confirmed that he created the image which conflates Putin and Hitler as a way to frame the message that Putin was  "using Hitler's playbook in his diatribe claiming Ukraine is part of Russia."

"Hitler said the same thing in 'Mein Kampf' when he insisted Austria should be part of the German motherlands. Putin's justification for invading Ukraine is eerily similar to Hitler's pretext for seizing Czechoslovakia and Poland. "

Mulder ended his statement with the Ukrainian phrase, "Slava Ukraini," which translates as "Glory to Ukraine."

So it's not a real magazine cover - but perhaps it ought to have been. Putin is constantly accusing the Ukranians of being Nazis but if he wants to know what someone who wages aggressive war as the Nazis did and floods the airwaves with the same sort of propaganda that Goebbels did, looks like, the Russian president need only look in a mirror. 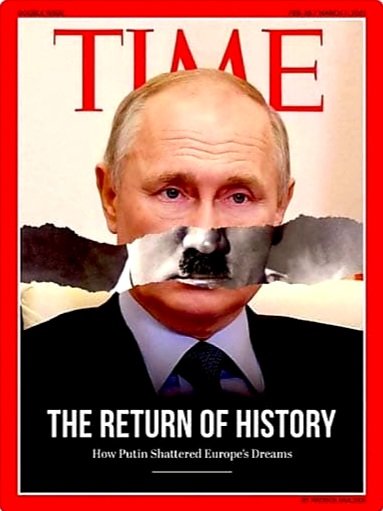 Posted by Chris Whiteside at 6:55 pm