As Europe stands on the brink of another world war, and the world on the brink of a possible nuclear disaster, I plead with you to use today’s negotiations to bring this terrible conflict in Ukraine to an end.

I say this as someone with deep personal ties to both my country of birth, and to the country where I was raised and now call my home.

On this page are the final minutes of a six-year-old child fatally injured by shells that struck her Mariupol apartment block on Sunday. She is still wearing her pink jacket as medics fight to save her. But it is too late. Other children, and other families, are suffering similar fates across Ukraine.

As a Russian citizen I plead with you to stop Russians killing their Ukrainian brothers and sisters.

Today’s negotiations at the Ukraine-Belarus border provide a moment of hope. You can stop this conflict. Please seize the moment and end this war today.

Proprietor of the Evening Standard."

(This plea to Russia's President Putin to end the war in Ukraine from the proprietor of the Evening Standard, who has both British and Russian citizenship, formed the front page of the newspaper on 28th February, with the headline, "President Putin, please stop this war."

I will have more to say about this but please note - Lebedev must have known when he put this on the front page of a newspaper that Putin will never forgive him for it. Even using the word "war" to describe what Putin's forces are doing in Ukraine is banned in Russia. He knew he was making an implacable enemy of a man with a track record of sending assassins to Britain to try to kill Russians who had annoyed him. That took guts.) 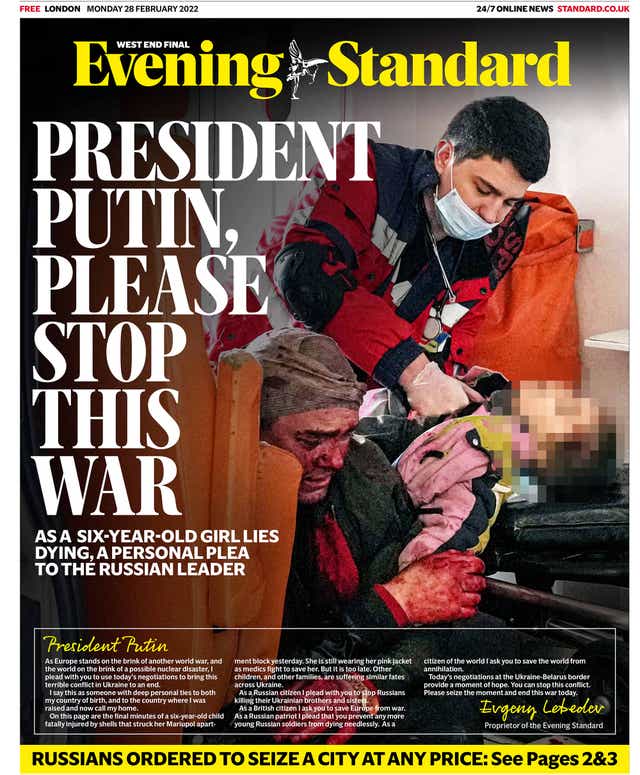