Independent research by the Resolution Foundation has found that, quote

"The proportion of low-paid workers across Britain has fallen to its lowest level since 1980 - falling by 200,000 in the last year alone, and by 900,000 since 2015. This welcome fall in low pay has been driven by the introduction of the National Living Wage." 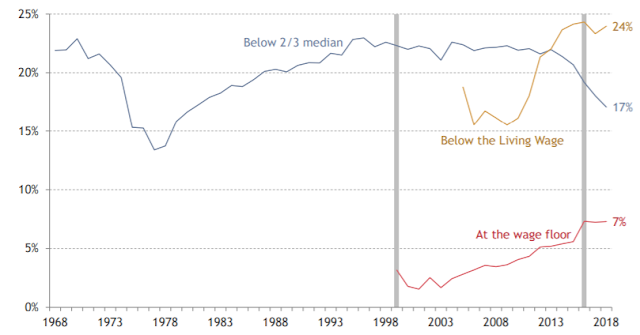 During the latter part of the period on the above chart, particularly after the introduction by George Osborne of the National Living Wage, the floor level of wages for the majority of workers rose significantly, which is why the proportion at the wage floor has gone up slightly.

The "Living Wage" is an estimate of the wages required to meet the cost of living, which pre-dates the government's National Living Wage: between the impact of the 2008 recession and about 2015, the proportion of people living on incomes below that level increased by about 50% but the National Living Wage and the fact that real wages are recovering and have now passed pre-recession levels has stabilised this.

Also over this period the number of people in work has increased by more than three million to the highest employment rates for forty years, and the increase in Personal Allowance has taken millions of low-paid families out of the scope of income tax.

The impact of this is that the Conservative and coalition governments have done vastly more to reduce income inequality in this country than Blair and Brown ever did.

The Resolution Foundation's report can be found here.
Posted by Chris Whiteside at 2:43 pm