Progress against COVID-19 is not binary

I have been reading today's piece in The Times by Matthew Parris, in which he suggests that talk of "all-out war" against the coronavirus "only scared the nation out of its' wits."

Not sure I'm entirely with him on that part of his analysis. Faced with an outbreak which has so far caused fifty thousand premature deaths in this country alone and might well have killed half a million Britons if we had done nothing about it, a certain amount of fear is an entirely rational response. What's more, if it made people take seriously the need to protect themselves and others and thereby saved lives, a useful one.

Where I think he's on to something is that binary "black versus white" modes of thought may not be the best way to think about the success or otherwise of measures taken against COVID-19 either relating to people and ideas or a completely binary assessment of total success against complete failure. A policy or measure which has not reached  the targets set for it or saved as many lives as had been hoped may still save enough lives to be well worth doing, even though we would be right to ask if it could have been done better.

There is precisely one case - smallpox - of a disease which used to be one of the worlds worst killers being completely eradicated.

There are many more, however - Polio, Diphtheria, Tuberculosis, being examples - where the incidence of the disease has been dramatically reduced but not eradicated. These  diseases still "lurk" in Matthew Parris's words about COVID-19 and could start to come back, as Measles has begun to do, if enough people listen to the fatal lunacy of the  Anti-Vaxxers. But for the moment what used to be massive killers have been reduced to a fraction of the menaces they once were.

Coronaviruses have the capacity to mutate and change. Just as vaccination against the flu has saved millions of lives but has to be repeated at annual intervals with adjusted vaccines to protect against new variants of the disease, it is more likely that we will succeed in getting the deaths and disruption caused by COVDI-19 and its successor variants down to a far less disastrous level than it is that we will succeed totally eradicating this disease. But that is certainly worth doing.

In dealing with diseases we often face an issue which was raised by one of my favourite economists and has often been quoted on this blog: 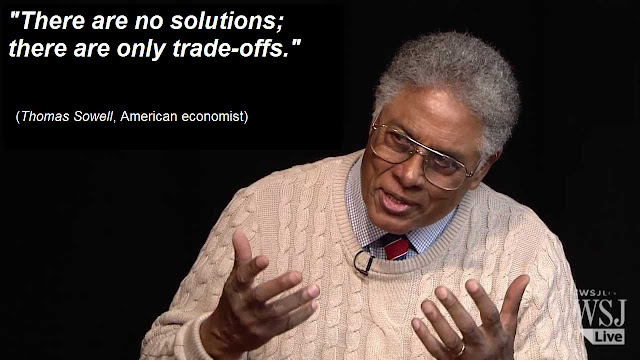 As with economic choices, so with health ones.

You need only look at an issue referred to earlier today on my blog to see an example - Test and Trace.

If you take a positive view, from 5th to 11th November, NHS Test and Trace successfully reached record numbers of people who had been in contact with someone who tested positive for COVID-19, which was over 232,000 people, and asked them to self-isolate. A record number of positive cases (156,853) transferred to contact tracers, an increase of 11 per cent compared to the previous week.

313,771 people were identified as coming into close contact with someone who had tested positive. Of these, where communication details were available, 77.9% were reached within 24 hours and asked to self-isolate. Details of what Test and Trace achieved that week are available here.

Taking a negative view, press reports on the same information concentrated on the fact that only just over 60% of contacts were reached that week taking account of those for whom contact details were not available.

So which is correct - the "glass is half-full" positive view or the "half-empty" negative view?

Of course we need to improve that performance further. That should not be incompatible with recognising the progress made and that with 60% of contacts reached we will prevent a lot of infections and save a lot of lives which would not have been saved if we had no Test and Trace system at all.

Let us be honest with people, in recognising the hard work and achievement of those who have got us this far, in also recognising what we still have to do, and about what we can realistically expect to achieve.

Posted by Chris Whiteside at 11:01 pm