Measuring the impact of COVID-19

The vaccines which give us hope of a return to normality appear to have arrived just in time as the increased spread of  COVID-19, apparently due to the greater infectiousness of the new variant, has produced some very alarming figures over the last few days, with daily new cases passing 50k for the first time yesterday. 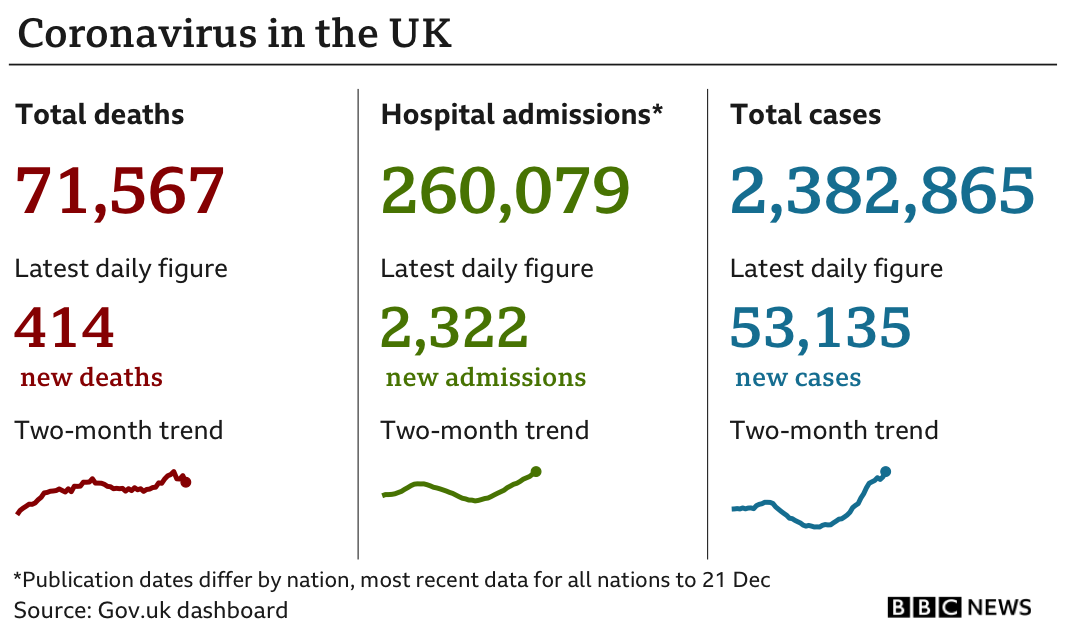 Although this particularly high figure may partly represent fluctuations in reporting over Christmas, scientists and statisticians say the main driver is a genuine underlying increase. Here is a table pulled together by the BBC using government sources of data showing the seven-day rolling average of new cases in the UK over the time of the pandemic. 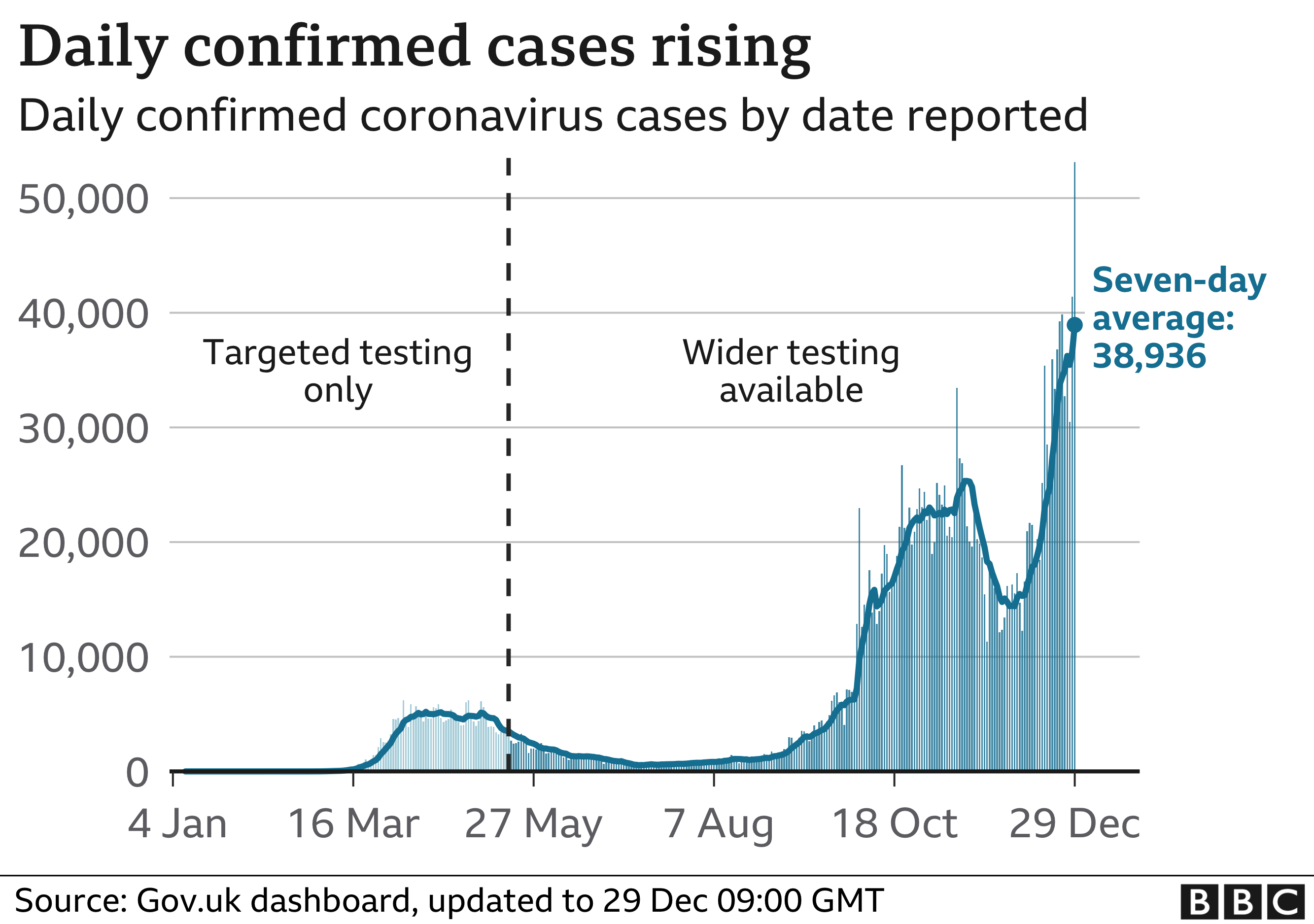 However you measure COVID-19 related deaths, and as we'll see in a moment there are about three ways to do this, they are currently running at about half the daily rate at the peak of the first wave which is still a horribly high level.

The seven-day average daily death rate for COVID-related deaths in the UK is 466 as of this morning.

To put that in context, number of people dying with COVID-19 on the death certificate or within 28 days of a positive test every WEEK is nearly twice the number of people who have died from Road Traffic Accidents in the UK every YEAR for the last decade, (which up to and including the latest available figures, for 2019, has been stable at about 1750 a year according to Department of Transport road casualty figures.) 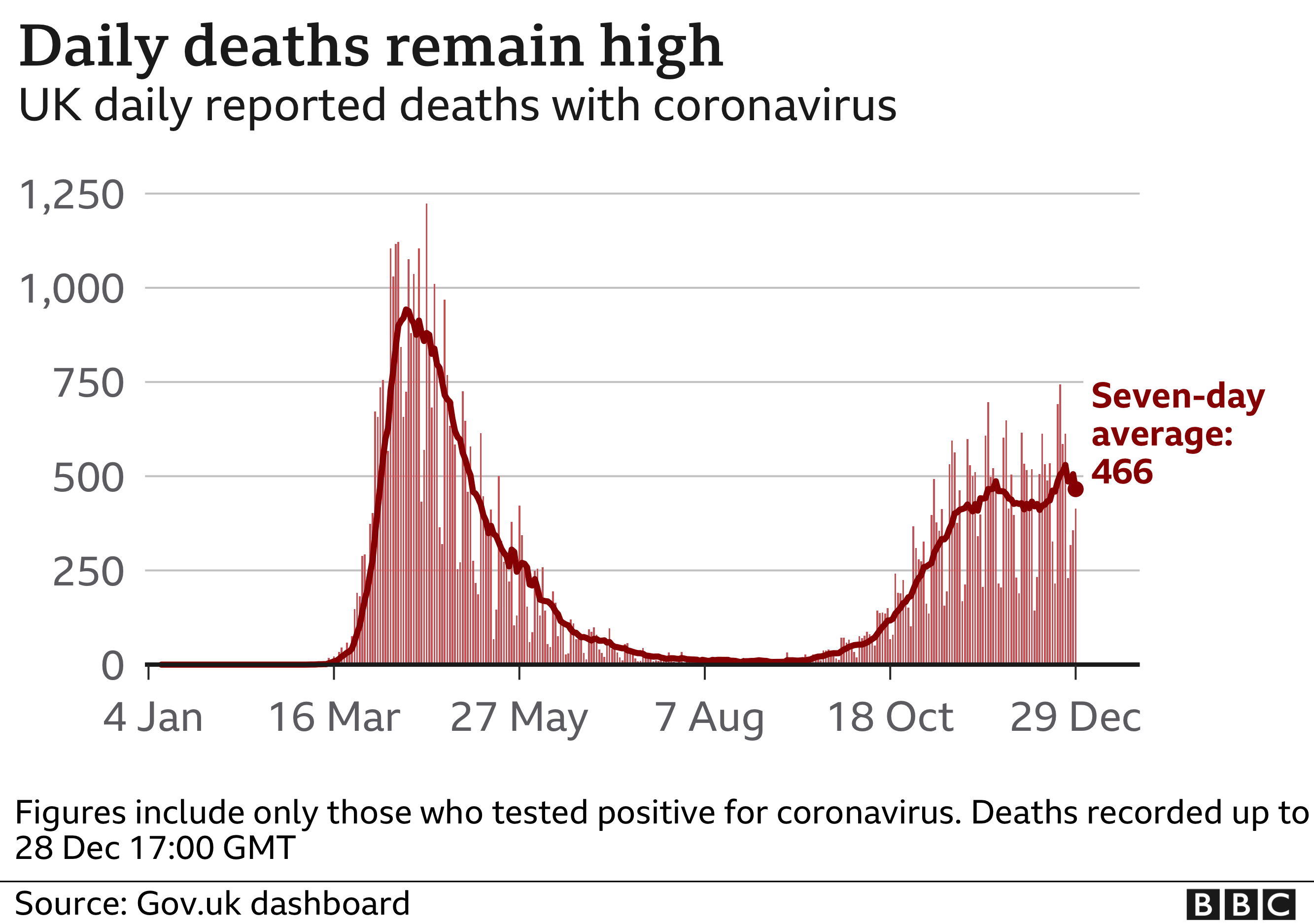 As mentioned there are three basic approaches to measuring the number of deaths caused by COVID-19: the first two look at deaths which either have COVID-19 mentioned on the death certificate or took place within 28 days of a positive diagnosis respectively.

A more complete picture - which has the advantage and disadvantage that it also picks up premature deaths caused indirectly by the coronavirus, including the net extra deaths caused by the measures taken to deal with it - is given by comparing the actual deaths per week with those which you would expect at the same time of year in an average year.

Here is the current toll of premature deaths in the UK since the beginning of the pandemic on each of these three measures, compiled by the BBC from government figures: 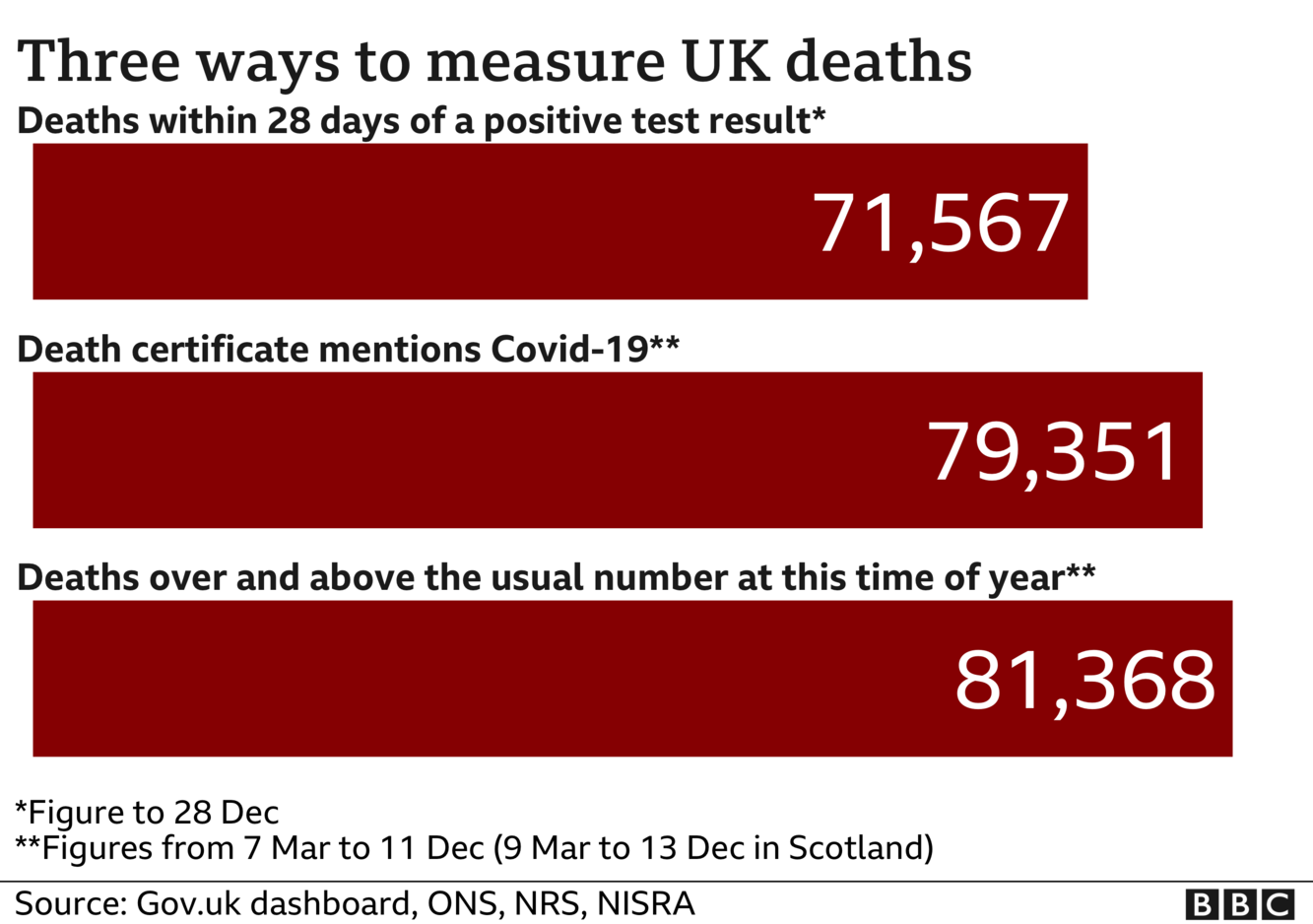 These are statistics but every unit in each of those numbers represents a family who have lost someone they love earlier than would have been the case had there been no pandemic. Most often a father or mother, grandfather or grandmother but also uncles and aunts, brothers and sisters, and some were sons and daughters of people still living.

The World Health Organisation global COVID-19 tracker data paints a fairly similar and utterly horrifying picture around the world: some countries are doing a bit better and others a bit worse but very few have been unscathed.  Globally, as of this morning there have been 80,453,105 confirmed cases of COVID-19, including 1,775,776 deaths, reported to WHO.

The vaccinations which are now being rolled out will eventually bring us back to something like normality, probably about springtime, but there is going to be a very difficult two or three months first.

Between now and when we have finally vaccinated enough people to be able to safely resume most of the activities which before January 2020 we took for granted, there is going to be a period when strong social distancing precautions have to stay in place and may well need to get tougher. This is going to be painful for people who have already suffered so much.

But the figures above for infections, hospitalisations and deaths explain why this is necessary. Without social distancing and other precautions we'd soon see death rates even higher than Britain suffered in April 2020 as the new variant spread like wildfire among the old and vulnerable.

That cannot be allowed to happen.

We will get through this. But we must not drop our guard against the Coronavirus until we have.

Posted by Chris Whiteside at 11:03 am

what an utter load of crap. It pains me that we now live in a police state. Im sad.

You have over the years written some very intelligent and things and others which were not intelligent at all on the comments section of my blog, Jim.

In the post above I simply pulled together from easily available published sources, mostly via the BBC, a factual summary of the figures published over the last few days, all of the numbers in the post are ultimately transparent and verifiable. And they match what I'm hearing in my health capacity, both from official sources and from my contacts in local hospitals, where people are under enormous pressure.

There are countries like China, Russia and Iran where governments can get away with massive lying about illness and deaths on this scale but Britain isn't one of them.

Of course the official our numbers are not perfect and they are the subject of lengthy discussion, and you can put legitimate arguments about where the real COVID-19 death toll is within the range of 70,000 to a little over 80,000 which I quoted, or even make an argument for a bit higher or lower, and some people have.

But everybody outside the tinfoil hat brigade knows that Britain's cumulative death toll really is well inside the range between 50k and 100k.

The number of people who have tragically lost their lives prematurely because of this bug is nowhere near as low as 50,000 and has not reached 100,000 - yet. But if we don't take effective action it's heading that way and a lot higher.

The published numbers clearly demonstrate credible grounds for serious concern at the frightening rate at which the coronavirus is spreading and how a tragic death toll, already running at a hundred times the weekly rate we are used to losing people to road traffic accidents, could easily get much worse.

If your rude and childish response above is the best you can come up with, you are clearly not at the top of your game.

I hope that COVID has not completely spoiled your Christmas and that you and Angie are well and stay that way.