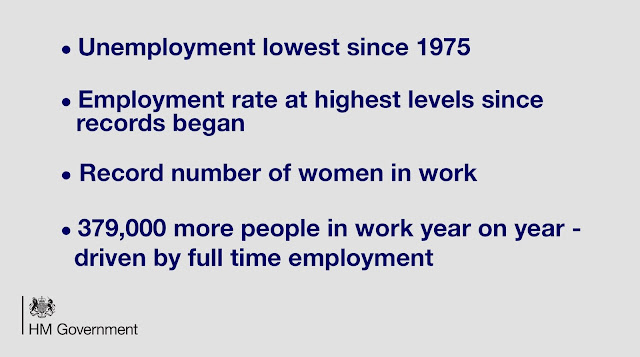 1 - how many of them employed?

2 - and how many of them full time, on permanent contracts

3 - Why, why cant 1 wage support a family anymore like it could when I was little?

More people under-employed than ever before.

You know me, no one gets a free ride, and I think they are decent and honest questions. I would expect an answer from any self respecting politician.

Without wishing to imply that politicians are not self-respecting you might to better in several of those cases to ask a statistician rather than a politician. There is a lot of published data about the latest employment and Labour force figures in the September Labour force bulletin at the ONS site at

but here are some of your answers.

First of all, in answer to the suggestion that more people are under-employed than ever before, this does not bear any relation to the facts about the actual number of hours worked. The Labour bulletin states in Section 6 on actual hours worked that, quote

The number of people in work in the UK increased by 181,000 in the 3 months to July 2017 to a new record high of 32.1 million, following 3 consecutive quarters (including the current quarter) of growth. The employment rate reached a new record high of 75.3% (up 0.5 percentage points) in the quarter. The number of employees and self-employed both increased in the 3 months to July 2017 and are also at record levels (27.1 million and 4.8 million respectively).

The increase in employment coincides with a fall in inactivity. The total inactivity level decreased by 107,000 since the 3 months to April 2017, while the inactivity rate declined by 0.3 percentage points to a record low of 21.2%. These latest figures highlight some strengths in the UK labour market.

Total weekly hours increased by 1.5% in the 3 months to July 2017 (up 15.7 million hours) compared with a year earlier, coinciding with the recent growth in employment.

The majority (72.1%) of all people in employment worked 31 hours or more as their usual weekly hours. The average weekly hours for full-time workers remained unchanged at 37.5 hours.

The average weekly hours for those on zero hour contracts were 21.4 hours in the 3 months to June 2017, higher than for part-time workers who worked 16.3 hours on average during the same period.

So the answers to Jim's questions are

2) There were 23.6 million employed full time and this increased by 96,000 in the past quarter, I cannot tell you how many of those were on short-term contracts but according to the Times this morning, the number of people on zero-hours contracts has reached a plateau.

3) It isn't impossible. I supported a family on one salary for twelve years between about 2002 and 2014. I'll agree that it is harder, which I put down to higher transport and housing costs.

4) No, according to this morning's Times newspaper, full-time employment accounted for 313,000 of the 379,000 extra jobs compared with a year ago, so part time employment must have been up by 66k.

Incidentally, the ONS also publishes a measure of underemployment, indicating how many more hours people in work would like to work, and this has now dropped back to a similar level to that which applied just before the 2007/8 crash.

So the weight of evidence is that Britain is experiencing strong demand for labour and are doing well in getting people into work, including full-time work for those who want it.

Where we are not doing well is increasing the productivity of people who are in work, and this in turn is one of the major reasons why Britain's performance in increasing real incomes is much less satisfactory than our performance in getting people into work.

To address this we need incentives for companies to invest, more flexible and dynamic management, and better training.

British management has always been the problem, and still is.

Some - not all - British companies are badly managed. Some of their decisions certainly contribute to Britain's productivity problems. If we could improve the quality of management some of the consequences might include more investment, more R&D, more innovative policies and higher productivity. To that extent I go along with the direction the author of the anonymous comment above is pointing in.

However, the idea that all British companies are badly managed or that everything affecting poor productivity is down to management is as facile and incomplete as an explanation as it would have been had I written that it was all down to lazy workers and stupid trade unions (which I did not write and do not believe.)

If there are no consequences for incompetence then incompetence becomes systemic, Cumbria CC is a fine example of that.

There are always consequence for incompetence, though these are not always as effective in changing behaviour as they should be.

Systemic incompetence cannot exist indefinitely in the private sector because it eventually results in the bankruptcy of the organisation concerned.

It is a challenge for the public sector to ensure that lessons are learned from mistakes and there have been events this year in Cumbria which reinforce the need for this to happen.