Are we experiencing a golden age of science fiction ? (Spoilers)

Anyone who has been reading this blog for any length of time has probably gathered that there are a number of things outside politics of which I am a huge fan: one is certain genres of music, particularly Baroque, Classical, and English Church music; another is science fiction.

Be warned that this post contains spoilers for Seasons one and two of "Star Trek Discovery," Season two of "The Mandalorian" and the last three episodes of "The book of Boba Fett" so if you are planning to watch any of those and have not got round to doing so you may wish not to read further.

This post will mostly discuss onscreen science fiction - particularly streaming shows - but I would apply my thesis to books as well. For the purpose of this review all space opera is considered to be science fiction though I am well aware that Star Wars could be argued to be fantasy rather than Sci-Fi.

Isaac Asimov and many others regarded the Golden Age of Science Fiction as being from the late 1930's to the end of the 1950's (when the "New Wave" of science fiction took over.)

At this time there was a huge outpouring of imaginative fiction about the future in the form of novels, short stories and comics. It varied enormously in quality but the best writers involved - Asimov himself, Robert Heinlein, Arthur C Clarke, Poul Anderson, Philip K Dick, and John Wyndham to name but six of them - were up there with the greatest writers of all time in any genre and have had an enormous impact, most of it for good, on our world and society, in the way it has inspired generations of young people to go into science any many other people to expand the way they think. It is snobbery of the most egregious kind by the literary world that too many people in it, in publishing, academia and the MSM look down on science fiction.

As Carl Sagan wrote, "Many scientists deeply involved in the exploration of the solar system (myself among them) were first turned in that direction by science fiction. And the fact that some of that science fiction was not of the highest quality is irrelevant. Ten year‐olds do not read the scientific literature."

Over the subsequent years as the technical capabilities of studios have vastly expanded, science fiction has also come to the small and large screen, taking a huge leap with the original series of Star Trek, but expanding vastly thereafter.

Hollywood has been mining the work of Golden Age science fiction writers for years - particularly Philip K Dick for some reason, though they often put their own take on his work and that of other artists, which sometimes added to it and sometimes did not.

In particular I have never forgiven Ridley Scott and Alex Proyas for picking the source material for the films they wanted to make the wrong way round: Proyas made a "Robot Menace" film out of "I, Robot" based on the pro-robot stories by Isaac Asimov, who was utterly fed up with the "Robot Menace" genre, while Ridley Scott made the pro-robot film "Blade Runner" based on Philip K Dick's "Do Androids dream of electric sheep" which is probably the best robot menace short story ever written.

I don't think any of the other science fiction writers of the late 20th and early 21st centuries quite reached the level of genius of Isaac Asimov or Arthur C Clarke, though some of them were certainly very good indeed: but there is such a wealth of writing coming out now from many new writers coming through that I have high hopes that one or more new writers of that level of ability may emerge.

The other thing which is happening now, particularly on streaming services but it is influencing film and network TV, is that the explosive growth and profitability of these services and a whole host of technical breakthroughs is enabling these studios to throw the resources at producing clever onscreen science fiction, and in particular hiring good writers and not just relying on special effects and big explosions.

A whole host of both Sci Fi classics and new material are being made available - even though it is most irritating that it's on half a dozen different streaming services.

Come back Disney, all is forgiven

Let's look, for instance at how much better the "plot armour" problem is handled in some recent examples in, say, the Star Wars universe than in the first six films. If all your heroes survive being shot at by thousands of enemies who are supposed to be dangerous opponents, you risk losing credibility. (The Mandalorian has now made it official Star Wars canon, by the way, that the Empire's Stormtroopers have a reputation for not being able to hit the side of a barn, even though their armour makes them look very similar to the old Republic's clone troopers who certainly could.)

More recent shows, however, like The Mandalorian, the Bad Batch and the Book of Boba Fett, recognise that even though their heroes are superb soldiers or warriors and have some of the best armour in the galaxy, they will sometimes get hit when lots of people are shooting at them: you see blaster bolts hitting their armour, sometimes denting it or wounding them, and the stories show you that important characters they really could be killed, or severaly hurt and have to recover, and it makes the story far more exciting and realistic than when those characters appear to be invulnerable because the story writers will always make all the shots fired at them miss.

Disney had a terrible reputation for ruining stories, but in hiring Dave Filoni and Jon Favreau they have brought people on board who know how to tell and interesting and entertaining story, know how to listen to the fans, and given them the creative autonomy to produce something worth watching: I thought the Mandalorian was brilliant, and although I know the fan reaction to the Book of Boba Fett was not as positive I thoroughly enjoyed it.

I think what Filoni and Favreau have done worked particularly well because they were willing to listen to ideas from anywhere (and steal great concepts from other science fiction genres.) For example, one recent episode of the Boba Fett series, the "Mando on Ringworld" episode was set on a habitat which looked remarkably like a homage to Larry Niven's Ringworld - I wonder if humanity's distant ancestors the Pak sent an expedition to the galaxy where Star Wars is set?

The "de-aging" technology used to make Mark Hamill look several decades younger (so that he could play Luke Skywalker in scenes set some five years after the battle of Endor) worked reasonably well in my opinion even when first deployed, but not everyone liked it and I'm told some computer genius posted a clip showing he could have done better. So they hired him to improve it and sure enough a couple of weeks ago we saw a brilliant scene with Mark Hamill looking as if he was at most in his early thirties (he is actually seventy.)

I greatly enjoyed seeing characters like Bo-Katan Krise and Ahsoka Tano brought to live action - and it was a brilliant decision in my view to cast Katee Sackhoff and Rosario Dawson who had voiced the characters. I am really looking forward to the return of Ewan MacGregor and Hayden Christensen reprising their roles as Obi-wan Kenobi and Anakin Skywalker/Darth Vader and live action versions of characters like Grand Admiral Mit'thraw'nuruodo. 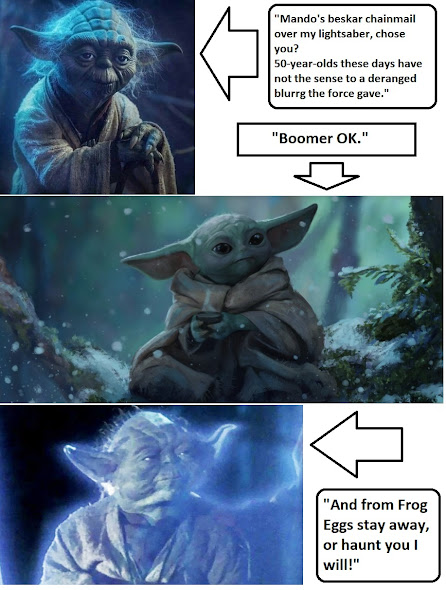 From Star Wars to Star Trek

I've written quite a lot about the Star Wars Universe but I am equally excited about what is happening in the other huge Space Opera franchise.

The first two seasons of Star Trek Discovery, set about ten and eight years respectively before James T Kirk took command of the Enterprise, were brilliant in almost every way except for the inexcusable appearance of Klingons and Klingon ships - I could have put up with new variants of the Klingons as they are a multi-species empire and the main Klingon species might well have previously unseen races, but at least some Klingons in that era would have had the Phlox mutagenic virus which made them look almost like humans, and some of the rest should have looked like Worf. And every science fiction fan since the 1960's has known exactly what a Klingon D6 or D7 battlecruiser looks like.

A particular highlight of the second series was the performance of Anson Mount as Captain Christopher Pike who was captain of Enterprise for the original 1965 pilot episode of Star Trek, "The Cage" and Rebecca Romijn as his second in command "Number One" (whose real name we now learn was Una.) These characters were such a hit in "Discovery" that Paramount are shortly bringing out "Strange New Worlds" a series set on the pre-Kirk Enterprise featuring Mount, Romijn and Ethan Peck as Pike, Number One, and Spock.

For all practical purposes what this means is that Paramount is about to set a record for the longest ever gap between a pilot episode and the subsequent series - 56 years. Back in the sixties the studio had decided after the pilot that the idea was good but the execution wasn't quite right so they fired all the characters except Leonard Nimoy's Spock, reworked it, set it ten years later and came out with what is now known as The Original Series of Star Trek. Some of the material from The Cage was used in the original series episode "The Managerie."

Anson Mount's performance in Discovery Season two was, in my humble opinion, a serious contender for the title of the best performance by a Star Trek captain in his first year in the role, so I am really excited to see what comes of Strange New Worlds.

A shame that it is being released on Paramount Plus - I already pay for four streaming services when I don't have time to watch all the material on even one of them, so have decided that four is my limit. But it should be available on DVD before too long.

For the same reason I have not yet had a chance to see what Apple TV have made of Isaac Asimov's "Foundation" series of novels but I am hoping this too will be out on DVD before too long.

All in all, it is a great time to be a science fiction fan.

Posted by Chris Whiteside at 10:45 pm