Congratulations to local paediatrician Dr Caroline Johnson who won the Sleaford & North Hykeham by-election with 54% of the vote and a majority of 13,144. 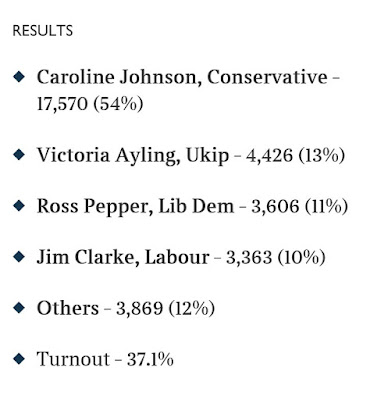 It was a very bad result for Labour and the second bad by election result in consecutive weeks, one in a pro-remain seat at Richmond Park and now in a pro-Leave seat in the East Midlands.

This was a more serious blow for Labour than Richmond where they never had a chance and were always going to suffer a tactical squeeze: this time they started in second place and should have had as good a chance as anyone to get a bandwagon going.

Instead Labour lost more than half their vote share, dropped from 2nd to 4th place, polled less than the combined "others" total which included a "Looney" candidate called The Iconic Arty-Pole,  and were reduced to making a big thing of the fact that they didn't (quite) lose their deposit.

A few days ago I referred here to a Dan Hodges article which argued that Labour is in serious trouble. He suggests that:

"There is Brexit Britain, tired of ultra-liberalism, and hungry for a return to ‘traditional values’.
There is Remainer Britain, horrified at what it sees as a conservative counter-revolution, and committed to driving the ‘Alt-Right’ barbarians from its progressive gates.
And there is Middle Britain – majority Britain – which has no real desire to rally behind either of these cultural battle- flags, and just yearns for a modest but measurable improvement in daily life.
Labour no longer represents any of these three factions. It does not know how to speak to them. It does not know how to identify with them. It no longer even adopts the pretence of trying to speak to or identify with them."

The results of the two by-elections we have just had, one in a pro-remain seat and one in a pro-leave one, are consistent with Hodges' argument that Theresa May has made a successful pitch for Middle Britain while holding on to a chunk of Brexit Britain, while UKIP has the rest of Brexit Britain and the Lib/Dems are on the way to establishing themselves as the party of Remain, but Labour have no clear pitch to any of those three tribes.

Similar comments have come today from unhappy Labour MPs who feat their leadership's inability to put out a clear position is alienating both sides of the debate.

One said that Labour was in danger of following a "0% strategy" while David Winnick MP said the result was “appalling” and blamed Jeremy Corbyn’s leadership.

“If we were to continue in this way then the indications are 2020 will be an electoral disaster and the possibility of a Labour government very remote indeed,” he said.

“The sort of bunker mentality that seems to exist at the moment at the highest levels of the party needs to recognise what is happening in the outside world.”

George Osborne tweeted that the disintegration of the Labour party is not good for democracy.