I do not always share the views of Private Eye editor Ian Hislop, but the edited version of his 2016 Orwell lecture which has been published in the New Statesman here, a robust defence of free speech and genuine debate, is the best article on any subject I have read in 2016.

It is interesting, and more than a little frightening, to note the extremely strong parallels which Hislop draws between modern willingness to believe the most preposterous lies and shout down those who express differing opinions and the perils which George Orwell warned against in "1984" and "Animal Farm" - books written at t,he time of the rise of totalitarianism, of a world war against fascism, and then a cold war against communism.

The article version is illustrated by some covers and cartoons which originally appeared in Private Eye and descriptions of the reaction to them. This was an example: 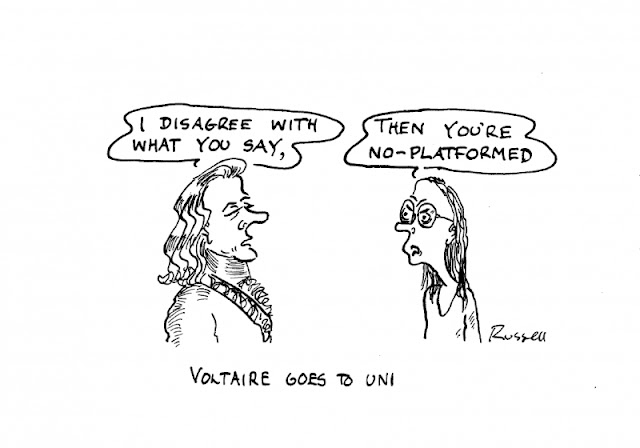 Private Eye's concerns about free speech in Universities were "dismissed as 'sneering' and, inevitably, 'fascist' by a number of student commentators."

But the response to that was mild compared with what happened "when Private Eye suggested that some of the claims that the Scottish National Party was making for the future of an independent Scotland might be exaggerated."

"Those who disagreed with the SNP were beneath contempt if English and traitors if Scottish. This was matched by the sheer fury of the Corbyn loyalists at coverage of his problems with opposition in his own party."

And similarly when they criticised UKIP.

Something of the flavour of the article can be gained from the following two paragraphs:


Audiences listening to President-Elect Trump’s extraordinary disregard for anything resembling objective truth – and his astonishing ability to proclaim the absolute opposite today of what he said yesterday – will be forcibly reminded of the slogans that George Orwell gave to his political ­dictators: Black is White, War is Peace, ­Freedom is Slavery, Ignorance is Strength (the last of which turned out to be true in the US election). But any journalist trying to work out what the speeches actually mean, amidst the mad syntax and all the repetition (“gonna happen, gonna happen”), cannot help but fall back on Orwell’s contention that “political chaos is connected with the decay of language”. And the sight of Trump praising Secretary Clinton for her years of public service in his post-election victory speech while the crowd was still chanting his campaign catchphrase of “Lock her up” was surely a perfect example of Doublethink.

No wonder Trump is an admirer of Vladimir Putin, who is an admirer of the Soviet strongmen whom Orwell satirised so well. These echoes from the past are very strong in America at present but there are plenty of them reverberating through British and European politics as well. Our Foreign Secretary managed to accuse other European leaders of a “whinge-o-rama” when they issued qualified statements of congratulation to the new president-elect, even though he himself had previously accused Trump of being “nuts”. Black is White, Remain is Leave, a Wall is a Fence, two plus two equals five: but Brexit means Brexit."

It is very much worth reading the whole piece which can be found here.
Posted by Chris Whiteside at 1:47 pm