And the 2018 prize for the most ridiculous example of double standards goes to ...

Following a recommendation from the Electoral Commission that voters should be required to produce ID at polling stations in order to reduce electoral fraud (e.g. voting more than once by impersonating someone else,) the government is trialling a requirement for Voter ID at this year's local elections in five local authority areas.

The intention is that if this is successful if will be rolled out everywhere at the next general election in 2022.

A similar requirement is already in place in Northern Ireland, where ID has been required to vote for thirty years and prescribed forms of photographic ID since 2003 and there is no evidence whatsoever that it has materially reduced turnout. There are currently seven different forms of photo ID accepted in Northern Ireland, including an Electoral Identity Card. As you can read here, studies show that

"The Northern Irish experience suggests voters quickly adapt to the requirement, with little or no negative impact on turnout."

Incidentally, while dismissing suggestions that Voter ID is a wicked Tory plot to stop Labour supporters from voting, the same academic article linked to above also suggests that more should be done to improve the integrity of postal voting and although individual registration and the requirement for all postal ballots to be accompanied by a slip with the voter's signature and date of birth (in a separate envelope outside the one with the ballot paper) have certainly helped with that, I think the author has a point that the issue of how easy it is to get a postal or proxy vote would benefit from further study.

Proposals for voter ID have, however, come under fire from a number of directions including the Labour party - whose leader, incidentally, employs a 'campaign manager for the Labour party' who has been convicted of electoral fraud - and who have been energetically representing the attempt to crack down on voter fraud as an attack on democracy.

Since the Labour party requires people to produce ID before voting in it's own internal democratic processes such as internal Labour party elections, this is an absolutely bizarre example of double standards.

If an image of a social media message which has been doing the rounds is accurate and not from some kind of parody account, the prize for the most extreme example of double standards this year on the issue goes to the Bolton branch of Momentum, for this: 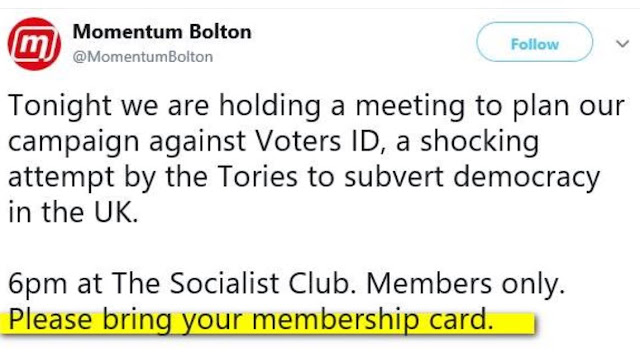 Yes, they are holding a meeting to plan a campaign against ID and they require the people attending to bring a membership card - a form of ID.

Excuse me while I roll on the floor laughing ...
Posted by Chris Whiteside at 8:42 pm

i cant see why "special voters id" would be required, after all every polling station has a copy of the electoral role, and they mark you off when you have placed your vote to stop you voting twice. a simple driving licence or your voting card must be sufficient.

The left were so good at it, bringing out the dead and the dying.

Im sure i have told you this before, but they often used to pick up my old grandmother put her in a minibus, and take her to the poling station to ensure she voted.

last laugh is she used to let them do it and when she got there voted Blue just for badness. (good old Gran King, she always had a good sense of humour and a wicked streak. RIP Granny)

As I understand it the "Special voter ID" is for those voters who do not have any other form of photo ID so that they don't get disenfranchised.

In this day and age only a few people need it as most people have a driving licence or a passport.