Joint statement by the US, British, French and German governments

The governments of Great Britain, the United States of America, France and Germany have issued a joint statement about the Salisbury poisoning.

Here is the full text of the joint statement.


"We, the leaders of France, Germany, the United States and the United Kingdom, abhor the attack that took place against Sergei and Yulia Skripal in Salisbury, UK, on 4 March 2018.

A British police officer who was also exposed in the attack remains seriously ill, and the lives of many innocent British citizens have been threatened. We express our sympathies to them all, and our admiration for the UK police and emergency services for their courageous response.

This use of a military-grade nerve agent, of a type developed by Russia, constitutes the first offensive use of a nerve agent in Europe since the second world war. It is an assault on UK sovereignty and any such use by a state party is a clear violation of the chemical weapons convention and a breach of international law. It threatens the security of us all.

The United Kingdom briefed thoroughly its allies that it was highly likely that Russia was responsible for the attack. We share the UK assessment that there is no plausible alternative explanation, and note that Russia’s failure to address the legitimate request by the UK government further underlines its responsibility.

We call on Russia to address all questions related to the attack in Salisbury. Russia should in particular provide full and complete disclosure of the Novichok programme to the Organisation for the Prohibition of Chemical Weapons (OPCW).

Our concerns are also heightened against the background of a pattern of earlier irresponsible Russian behaviour.

We call on Russia to live up to its responsibilities as a member of the UN Security Council to uphold international peace and security."

There has also been a White House statement in support of Britain: 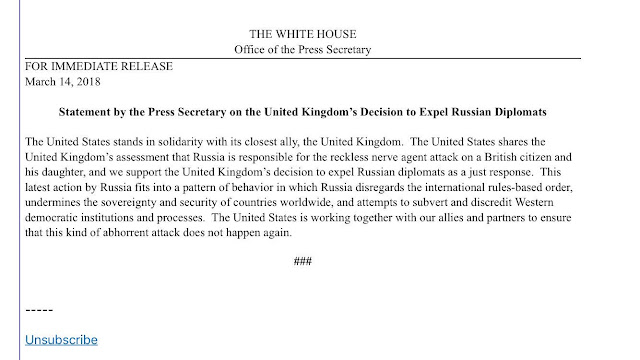 Posted by Chris Whiteside at 1:50 pm