Best spoof posts of the week

You'd think it was difficult for writers of spoof articles to top the events of the past fortnight but these managed it ...

Extracts from the above piece on NewsThump ...


“Jeremy Corbyn, a leader from the Islington system, has risked the ire of his own supporters by stating that he had yet to see any conclusive evidence that the planet of Alderaan was destroyed by an Imperial battle station.”

“Jeremy has always been against conflict and has never hidden that belief. He is on record as trying to stop the X-wing program as he spoke out against attempts to recruit known warmongers like Obi-Wan Kenobi.

“Jeremy proposes to lead a peace delegation to Coruscant as he believes dialogue should always prevail over primitive anti-Sith rhetoric.”

“Opponents of Jeremy Corbyn have seized on this opportunity to call him an Imperial lackey. Several published old photos of Mr Corbyn speaking at an anti-Jedi rally alongside Anakin Skywalker during the eighties.” 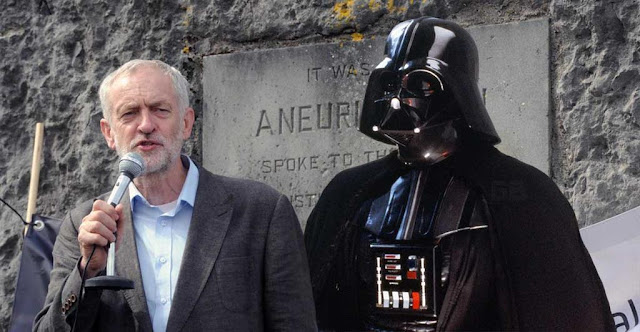 Like the picture above, presumably, though I understand Owen Jones has accused BBC Newsnight of photoshopping Anakin Skywalker's helmet ...


Other parody headlines this week with links to the relevant stories: