Stephen Pollard and Nick Cohen on the labour leadership

Just to frame the context of the articles I am about to link to.

Yesterday morning a Labour MP, Luciana Berger, posted on social media that she was awaiting a reply from the Labour leader's office to her message asking for an explanation of a comment Jeremy Corbyn had made in 2012 about a mural which just about everyone - including Jeremy Corbyn himself - now admits was Anti-Semitic  and in Corbyn's words, "deeply disturbing"

This is the statement which the Labour leader himself eventually made on the subject, 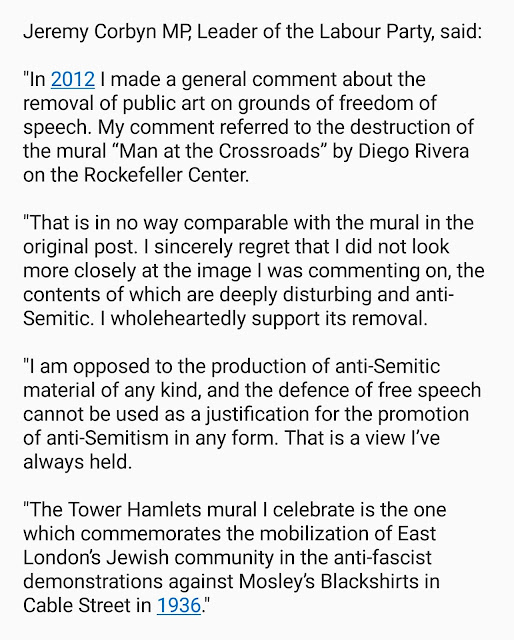 Even if you take that statement entirely at face value on its' own terms, it amounts to the admission of a colossal error of judgement for a man who was at the time a long-serving MP, is now Leader of the Opposition and who - God help us - about forty percent of voters supported at the last election and a similar percentage of those polled by opinion posters still say they intend to vote for as Britain's next prime minister.

Stephen Pollard, Editor of the Jewish Chronicle, responds here to this statement. His article is one of the most damning indictments of a British party leader I have ever read.

Guardian, Observer and Spectator columnist Nick Cohen has this to say about Jeremy Corbyn in the Spectator.

His article finishes by warning those on the moderate left that they have failed to confront the fact that "the far left is not merely an extension of the centre-left but a malign force which, as Momentum is proving, regards the centre-left as its avowed enemy."

And, I regret to say, also everyone else who dares express a view which is not that of the far-left.
Posted by Chris Whiteside at 10:30 pm