And yes, we still are in lockdown.

I thought the very cautious plan announced today to gradually relax the lockdown - conditional on people continuing to behave sensibly so that the rate of infection stays down - had a lot to commend it but we need more detail.

Hopefully that will be provided in parliament tomorrow and in the documents due to be published over the next couple of days. That is very important, because we need a clear message.

The biggest controversy seems to be over the messaging.

Now, if we were picking a slogan to use from today, without any history, I'd probably go with keeping "Stay home, protect the NHS, save lives."

I can see, however that the government might have wanted to update that slogan, not because there is anything particularly wrong with it, but because after 47 days it is losing force and this may be one of the reasons that the lockdown is definitely fraying a bit a the edges.

Ironically the refusal of the devolved governments to go with the change of words, and the

row about it in England, may actually be helpful by drawing attention to those messages.

We do still need to stay at home unless we have a good reason to be out: we do need to stay alert and think about how we reduce the risk of catching and passing on the virus. If a row about changing the message makes people think about what those messages actually means, it could be all to the good

Better to have that row than to keep the same slogan while it has less and less impact because that is they way people's minds work - if you keep saying the same words they do start to have less and less effect.

Incidentally, I don't suppose they will ever get any credit for it, but the fact that we are having more trouble getting people to stick with the lockdown suggests to me that the much derided "experts" from SAGE may have been right to tell the government three months ago not to go to lockdown earlier than they eventually did.


Meanwhile we come to the end of yet another beautiful day spent mostly indoors ...

I'm tempted to sign off with both the old and new slogans but for the moment here is the new one: 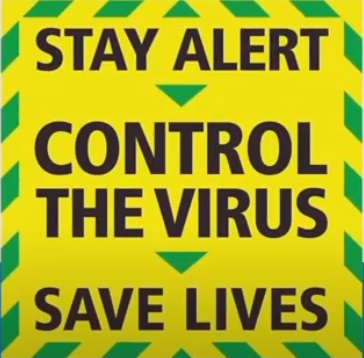 Posted by Chris Whiteside at 8:10 pm

Limited space on a slogan. Boris is all about slogans, though after the one they chose for the side of a certain bus, I'm convinced choosing the best one is not his strongest point. In this case think of it more as "help prevent the spread of the virus".

"control the spread of the virus by maintining social distancing, working from home where its possible, not using public transport and co-operate as much as possible with tracing after testing positive". but putting that on the side of a cruise ship may be a bit of a squeeze.

that was kind of the point of the cruise ship part.

So "control the virus" it is.