A fair-minded and reasonable person listening to the arguments advanced on both sides would concede that some of the points put forward both by objectors and supporters of the mine alike were stronger than others.

Most of those of us who support the mine, for instance, would not be in agreement with the one individual who put an "alternative point of view" than man-made climate change isn't real. That isn't our argument at all: we agree with government policy to stop burning coal in power stations and support this mine only because it is specifically for metallurgical coal to make steel, for which there is not yet a proven alternative.

Counsel for the main objectors, however, don't appear to have been listening even to their own side. They brought in a suppsed  "expert" from a think tank based in London - I won't say any more about her because if I said what I think it would probably be actionable - and, both when presenting her evidence and cross-examining WCM witnesses attempted to use average data for Copeland or even Cumbria to disprove the argument that there is poverty here.

God save the mark!

Anyone who knows the first thing about West Cumbria knows that a quarter of the working population works in the Civil Nuclear Industry which is a very high wage industry indeed, and that completely distorts many average measures of prosperity for the area. But ward level data such that that published by Cumbria County Council's observatory shows that despite these average figures the area still includes some of the most deprived wards in the country. 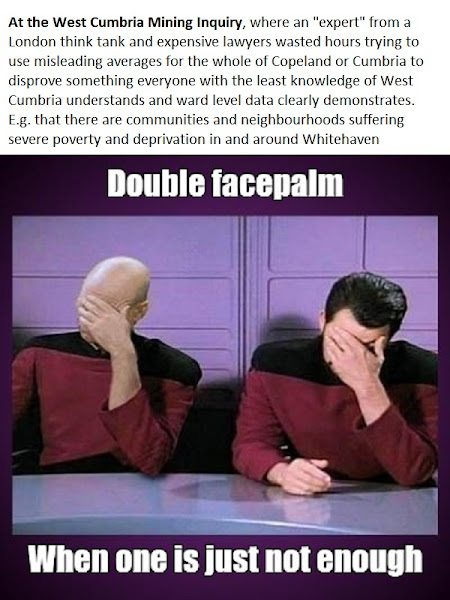 Posted by Chris Whiteside at 11:07 pm

Averages misleading? How true! Your idea?

I posted 2 comments but they did not make the cut. What’s the editorial policy?

If you do not understand how averages, especially when quoted out of context, can be extremely misleading, can I refer you to a good book on the subject such as "How to lie with statistics" by Darrell Huff (the oldest but easiest to understand) "Sorry, wrong number" by John Brignell or "Damn lies and statistics" by Joel Best.

In the case of West Cumbria, average figures for many social measures of affluence are distorted by the presence of one industry - the civil nuclear industry - which employs 25% of the working population and pays very high salaries indeed.

Consequently if you look at average figures for economic statistics covering the whole of West Cumbria without making any allowance for this, you are in grave danger of seriously misunderstanding the level of income among the rest of the population and may miss the fact that there are also pockets of serious deprivation among those who are not employed by the nuclear industry.

Ward level data paints a more sophisticated picture and does prove the presence of those pockets of deprivation in wards containing and near to the proposed mining facilities.

Those third party opponents of the mine who had made the least attempt to engage with the local community all recognised this and included in their evidence statements like "I do accept that there is a desperate need for jobs in this area."

But the lawyers for the main protest groups did not, and attempted to dispute what everyone who knows the tiniest thing about West Cumbria knows to be true - that it contains pockets of poverty and deprivation.

I usually allow serious comments through unless, as it above the box to type in comments, they are offensive or potentially libellous.

However, I am currently making an exception of Anti-Vax comments which I will not permit to appear on this blog while vaccine hesitancy is putting lives at risk.

And unfortunately it sometimes takes me longer than I would wish to get around to approving comments. Sorry about that.