Final thoughts on the 2018 local elections

There are two things which usually happen at every set of local elections, and three things which always happen.

The first thing which usually happens is a serious bloodbath for the candidates fielded by whichever party is in government, which usually loses hundreds of councillors.

The third thing associated with council elections, and this one always happens, is that instead of inviting senior councillors who might be expected to have a closer idea about the issues involved in these LOCAL elections, on TV to talk about the results from the perspective of each party, the TV channels always invite MPs or someone from party headquarters.

The fourth thing, and again this always happens, is that the party representatives always find some result to point to in order to argue that their party has done really well, especially if it is obvious to anyone who knows the first thing about politics that they have actually been handed by the electorate a very serious bloody nose indeed.

And the final thing which always happens is that journalists and representatives of all the parties alike when discussing the results mostly ignore their real importance e,g, who will be running local services for the next four years and what policies they will follow, and instead concentrate on extrapolations of what these local elections mean for national results, extrapolations which range from the interesting but unreliable to utterly meaningless.

Usually the party in government does much better in the subsequent general election than in local elections because there are always a lot of voters who use local elections to send messages to Westminster. Most often the message is to the government in particular and can be summarised as "Get your finger out" though it is pretty clear that the message sent by Barnet voters on Thursday was to Labour and it was "sort out your Anti-Semitism problem."

When a general election and a set of council elections take place on the same day, I seen results where the total numbers of votes cast made it mathematically certain that thousands of people in a constituency voted for different parties in the two elections held on the same day. Elections just a few weeks apart show even greater differences - for example last year both the Conservatives and Labour received significantly higher vote shares in the June general election than in the county council elections held in May.

So local elections are a terrible guide to general election results and the fact that political journalists and activists alike are all unable to avoid discussing them that way is almost like some kind of mild collective insanity.

I'm going to try to avoid falling into that trap and discuss the results in terms of how the parties performed against expectations - starting with the recognition that CCHQ did a superb job of expectations management and Labour did a truly awful one.

Only a few weeks ago the suggestion was that the Conservatives were looking at a catastrophic meltdown in London and a mediocre performance elsewhere in the country. That view was not just down to expectations management from the Conservative spinners, although they did judge it perfectly, it was also what polls and independent observers predicted.

Against that background, to limit the damage in London and hang on to all the councils which were Labour's main declared targets in the capital - Westminister, Wandsworth, Hillingdon and to actually take Barnet from No Overall Control, while gaining seats and councils in the rest of the country, looks like a victory. The Conservatives remain by some way the biggest party in UK local government, which is an  unusual achievement for a party that has been in government for eight years.

(At 5th May 2018, according to Wikipedia, the Conservatives have 9,081 County, District, Borough, Unitary Authority or other principal authority councillors throughout the UK compared with 6,470 for Labour and 1,870 Liberal Democrats. Various smaller parties and independent councillors account for the remainder of 20,762 councillors in total. Very slightly different figures, still putting the Conservatives at well over nine thousand councillors and Labour a little short of six and a half thousand, are circulating on social media this weekend.)

Here are a couple of extracts from what Stephen K Bush, political writer at the New Statesman, wrote on their "Staggers" site on 28th March, e.g. about a week before the elections, on "What would be a good night for the Conservatives" (one of a series asking a similar question about each of the three main parties.) 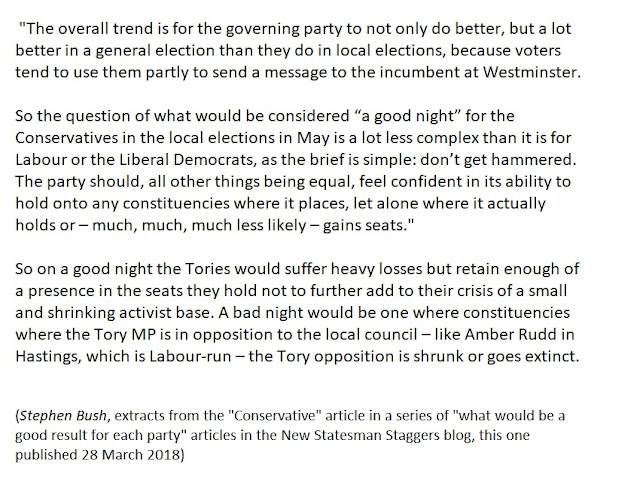 Overall Stephen Bush's article before the election suggested three criteria to judge how well the Conservatives did. Against those three success criteria, which were

1) "Don't get hammered"
2) Don't lose Westminster or Wandsworth, and
3) Don't get wiped off the council in places like Hastings

for a good night, the Conservatives achieved it. We lost a net 90 councillors in London but had a net gain of 57 councillors in the rest of the country for a net loss of 33 overall, and did indeed hold on to most of our council seats in constituencies like Hastings.

The most disappointing result of the night for the Conservatives was losing control of Trafford council, and we also lost three councils to the Lib/Dems, (the biggest swing being in Richmond on Thames,) one council (Plymouth) to Labour and a couple to No Overall Control.

* The Conservatives gained control of four councils and lost six.
* Labour gained control of three councils and lost three
* The Lib/Dems made the best advance of the elections, with a net gain of four councils and 75 councillors, but from a pretty low base.
* UKIP lost almost all (124 of 126) of the seats they were defending, with just one significant success: in Derby they held one of their seats, lost another to the Conservatives, and unseated the Labour leader of the council by gaining the ward where he was seeking re-election.

So overall, some good and bad news for all three main parties. Dare I suggest it is possible that, as it should, a lot of the variation might actually reflect how good a job councils actually were or were not doing in their own areas?
Posted by Chris Whiteside at 11:00 pm