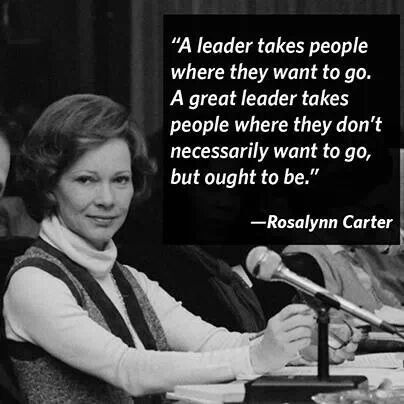 Posted by Chris Whiteside at 7:00 am

dangerous opinion that one. You have to ask in who's opinion ought they be there?

A classic example of course is that of Chancellor "he whom shall not be named" You see in his opinion people did not really want to spend a whole load of cash to somehow boost the economy, so he did it for us, to take us where we ought to be, with a booming economy. of course it actually did not quite work that way and we ended "up the creek without a paddle"

Though to give credit where its due, his plan was 50% successful, see he had always promised to end "Boom and bust", and his plan certainly stopped the boom bit

I think you and I are interpreting this quote very differently.

I took it as meaning that a great leader persuades people to follow him or her to places where they ought to be but had not previously wanted to be.

It is certainly dangerous for anyone to imagine they can force people to go somewhere - and likely to have counterproductive results.