When Jeremy Corbyn became leader of the Labour party he promised a new kind of politics, urged Labour members to treat one another and people from other parties with respect and said that there would be "no rudeness from me".

"Cut out the personal abuse, cut out the cyber-bullying and especially the misogynistic abuse online and let's get on with bringing real values back into politics," he said, an admirable sentiment often summarised as a call for "Kinder Gentler Politics."

This is indeed something which would be welcome from all parts of the political spectrum, but the Corbynistas only seem to demand it in practice from their opponents - inside and outside the Labour party.

A few days ago the Chair of Lewisham East Labour party, Ian McKensie, was suspended for posts he had made on social media in 2015 and 2016, when DA'ESH (the self-styled "Islamic State") still controlled significant territory in Syria and Iraq and were treating almost everyone in that territory, particularly women who were not enthusiastic supporters of their twisted perversion of Islam, with abominable cruelty.

During an online debate about whether there was any point in negotiating with DA'ESH, McKenzie referred to the way DA'ESH treated women, including selling them as sex slaves and beheading them, and suggested that given the chance they might treat a prominent female member of Jeremy Corbyn's team in this way. McKenzie (who is seen as an opponent of Corbyn) and his supporters have pointed out that the tweets were intended as a condemnation of DA'ESH and certainly not as support for actually treating any woman in this way.

Those who support the suspension, such as the author of a New Statesman article,

argue that it is misogynistic to "Undermine a woman’s political argument not with a counter-argument but with imagery of sexual violence being inflicted on her by bloodthirsty men" and that by posting these tweets McKenzie was "suggesting that this kind of language has a place in modern British politics" and that "rape jokes about women are OK."

Without knowing the full context it is not my place to judge whether that's what he actually did, but I certainly agree with the author of the article that jokes about raping and executing women have no place in British politics - whoever makes them. 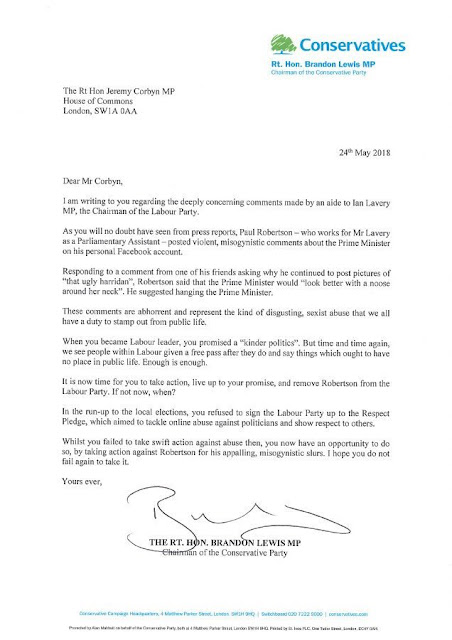 Posted by Chris Whiteside at 9:50 pm