75 years ago today, on 16th May 1943, nineteen specially modified Lancaster Bombers of RAF 617 squadron, led by Wing Commander Guy Gibson, took off to attack the Ruhr dams in Germany. 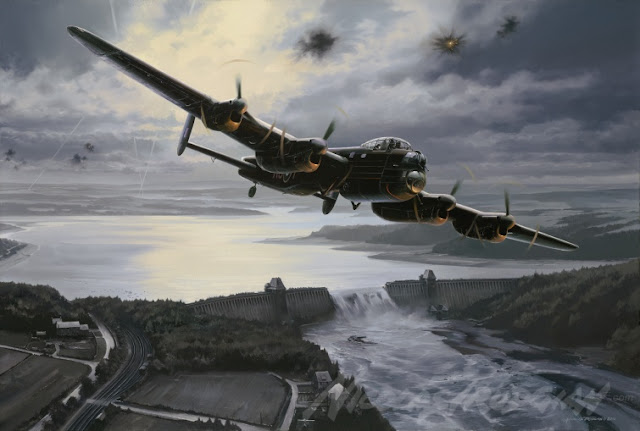 The attack which followed on the night of 16th/17th May, codenamed Operation Chastise,  using purpose-built "bouncing bombs" developed by Barnes Wallis to breach the Möhne and Edersee Dams, caused catastrophic flooding of the Ruhr valley and seriously disrupted military production for the Nazi war effort.

RAF 617 squadron has been known ever since as "The Dambusters."

It is beyond question that Operation Chastise was a crushing propaganda blow to the Nazi regime, but there has been some controversy about how much damage was actually caused.

"it is time to put the record straight."

He insists that the damage was "absolutely enormous" and it was "an extraordinary achievement."

Germans instantly referred to it after the raid as the "Mohne catastrophe". Even the cool Speer admitted that it was "a disaster for us for a number of months". German sources attribute a 400,000-tonne drop in coal production in May 1943 to the damage caused.

The fact that a titanic effort was made to repair this damage shows how high a priority the dams were, and it meant resources were shifted from elsewhere. Nowhere was this costlier to the Third Reich than on the beaches of Normandy.

Hitler had ordered the construction of a massive network of defences against an Allied invasion. Now thousands of workers who should have been toiling in France were redirected to the Ruhr to repair the dams. A year later allied troops would have faced far more significant defences had it not been for the Dambusters raid.

No raid mounted by so few aircraft had ever caused such extensive material damage. It did not bring German war production to a permanent halt, but nobody had expected it to.

"The most important impact of the Dambusters raid may indeed have been in convincing people on both sides that the Allies were winning, and that, often, is how wars are won and lost."

Eight of 617 squadron's aircraft were lost, 53 of the aircrew were killed and three taken prisoner. Thirty-four of the survivors were decorated, with Gibson awarded the Victoria Cross.
Posted by Chris Whiteside at 7:00 am