Ferrets in a sack, continued ...

According to this tweet from Labour sources, with a leaked memo from the Labour deputy chair of Vote Leave, the "Labour Leave" group has been offered by Leave.EU and Grassroots Out/GO a free office, £30,000 a month and a marketing budget on top of that, and "the full support of Arron Bank's operation" to switch their allegiance from Vote Leave to Leave EU.

You really could not make it up. This certainly isn't doing the Leave side any good, but I don't think it is good for the country either if it means the arguments for and against BREXIT are not equally strongly presented.

And for those people who have been screaming about how unfair the First Past the Post election system is - and yes, there are valid concerns about how that system operates - just thing about this.

If either STV or List PR had been in place in 2015, there is no way you could have constructed a government which would not have been dependent on the support of UKIP, either through a confidence and supply agreement or as part of a formal coalition. 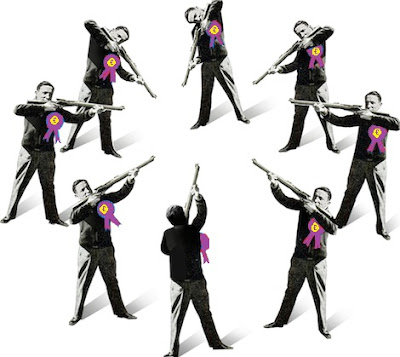 In other words, the people who are again fighting like ferrets in a sack would not be a couple of backbenchers, party donors, and officials from a party with one seat. The battle for the soul of the Brexit cause would almost certainly have sucked in government ministers, probably including cabinet ministers, and I think there is a strong possibility that this circular firing squad within the "Leave" side would have totally paralysed the government.
Posted by Chris Whiteside at 1:24 pm

The leave campaign, from the view of the SW1 bubble, is very much like a ship with out a rudder at the moment.

But then, thats just it. the SW1 bubble firstly dont seem to grasp that it is a leave campaign and not an Out campaign, nor that a referendum is not an election.

Come the launch of the Leave Alliance in mid march then there can be room for compromise with Leave.Eu, but Vote Leave ltd, with Elliot and Cummings are the SW1 bubble personified, they have to fold. You can call that in fighting all you want to, but we are trying to win a referendum here, and we cant do it with vote leave ltd as baggage, we just simply can not.

^ having said that Leave EU need to stop clinging to the disgruntled kippers, wanting things like Immediate border control. It has to stop the daft tweets and things if we want to win.

We have a real ace to play in that Cameron has pretty much asked for the square root of nothing, and seems to be miraculously getting less, but if mis handled that advantage is nothing.

The public deserves to see a decent case from both sides so they can make an informed choice. I'm not too impressed with what they are getting from either at the moment.