Finance Ministers and Central Bank governors from the G20 countries do not like the idea of Britain leaving the EU and included in the final communique of their meeting this weekend a comment to the effect that Britain leaving would be a shock to the global economy.

George Osborne said he agreed with this but denied that he or his officials had pushed for it to be included in the statement.

A senior official from the Treasury told the BBC the chancellor's US counterpart had raised the issue during the meeting, as did others, including senior Chinese officials and Ms Lagarde of the IMF.

I'm not sure that "shock" is the word I would use to describe the immediate effect of Brexit on the world economy, although if it resulted in any kind of trade war or started a process which led to the breakup of the EU - neither of which is an inevitable consequence of a vote to leave but might be what they are thinking could happen - the consequences might not be pretty.

The vote whether to stay in or leave is of course a matter for the British people to decide, but I don't see why our trading partners should not express their opinion, whatever it is.

"The Economist" magazine isn't terrible keen on the idea of Brexit either.

Their leader this week was about 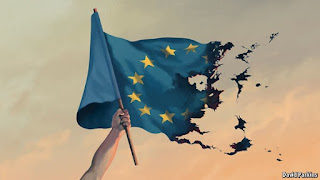 the real danger of Brexit

and argued that leaving the EU would "hurt Britain and deal a terrible blow to the West.

They followed this up with an analysis called "The Bexit Delusion."

Unlike the G20 ministers the Economist shared their reasons for thinking that if David Cameron loses the result will be "messy at best and at worst disastrous" and you can read them by following the link above. The magazine suggests that

"The immediate effects of a Brexit vote are likely to be bad. Prolonged uncertainty over Britain’s new relationship with the EU will discourage investment, especially foreign direct investment, of which Britain is the biggest net recipient in the EU. This is particularly worrying for a country with a large current-account deficit that must be financed by capital inflows. Fears about the current account, Britain’s credit rating and Brexit have been drivers of the pound’s recent fall."

"The longer-term effects of Brexit are also likely to be adverse. Most studies suggest that economic growth would suffer. A detailed analysis from the Bank of England in October found that EU membership had benefited the British economy. Attempts to model the consequences of Brexit point to economic damage. Two American banks, Goldman Sachs and Citigroup, recently warned that growth and the pound would fall further after a vote to leave the EU."

Whether or not you agree with this, the Economist is certainly right that

"The trickiest issue for a post-Brexit Britain would be how to maintain full access to the EU’s single market, the world’s biggest. This is crucial since almost half Britain’s exports go to the rest of the EU. It matters greatly for the fastest-growing component of exports, services (including financial services). It will not be simple."

If the Leave campaigns come up with a clear strategy to do this it will be possible for a sensible person to vote for Brexit. I have heard some individual leave supporters put forward what might be the basis for such a strategy. But unless whoever becomes the official campaign can take this up and clearly articulate it they will probably lose, and certainly deserve to.
Posted by Chris Whiteside at 11:30 pm