Project Fear from the "Leave" side - black propaganda about the NHS continues.

In a recent post in my "Worst of both worlds" series which criticises ridiculous and inaccurate comments from both "Leave" and "Remain" supporters, I referred here to the scaremongering from  Leave.EU in their attacks on TTIP (the proposed Transatlantic Trade and Investment Partnership trade deal) and particularly their attempts to suggest that TTIP might lead to the privatisation of the NHS such as this 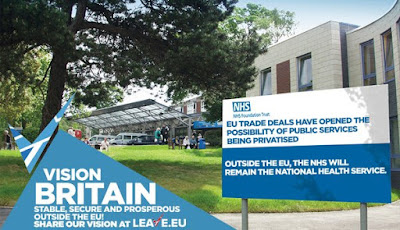 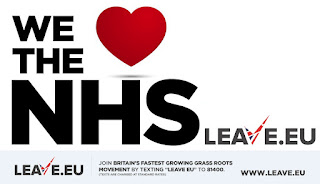 accompanied by the allegation that "There are genuine concerns that EU/US trade deal TTIP could lead to privatisation  of the NHS."

One of the few things which all the competing "Leave" organisations agree on is that if we were to leave the EU we would need to resume using Britain's World Trade Organisation seat and start lobbying on our own for better trade relations.

If we were not an EU member our trade links with other nations like the USA would be even more vital to us than they are now.

Unfortunately for the Brexit campaigns, United States Trade Representative Michael Froman has now said that America is not particularly in the market for free trade agreements with individual countries and he appeared to specifically rule out signing one with Britain.

Any intelligent and forward-looking "Leave" campaign which wants to see a modern, open Britain engaging with the world should be thinking about how they could persuade the USA to reverse that view. Of course, if they succeeded, it is probable that we would then have exactly the same arguments about the terms of the hypothetical bilateral Britain/USA trade deal which we would then need to negotiate that we are currently having about the proposed EU and America TTIP deal.

To any "Leave" supporter who wants to say something like "that's OK, we want to continue trading with America, we just won't have a TTIP style deal with them" I would say this. If you don't want to see the British economy wrecked should you win the referendum, you HAVE to have a clear idea of how you would ensure that British exports to America are not disadvantaged by our leaving the EU. That means a two way relationship with the US. And a two-way relationship means both sides have a say what goes into the deal.

To suggest that Brexit would magically resolve all the issues we may have with trade deals with the rest of the world is either duplicitous or catastrophically naïve.

That's the first point about how Brexit might affect international trade deals like TTIP. But the second is to look at the facts of what is actually proposed. And the allegation that TTIP could lead to involuntary privatisation of the NHS, which originated on the terminally looney anti-Globalisation anti-trade and anti-capitalist left but has been swallowed whole and regurgitated by some Brexit supporters despite their being mostly pro-capitalist free-traders, is a falsehood and scaremonger of the worst kind.

As I wrote here during the 2014 European elections, the proposed Transatlantic Trade and Investment Partnership (TTIP) aims to tackle market access issues and technical barriers to transatlantic trade. It has been estimated that the deal could bring an extra £10 billon to the UK annually. That is equivalent to an extra £400 to every UK household. This would both help to restore living standards, badly squeezed during the economic downturn, and make more money available for schools and hospitals.

TTIP has not yet been signed so it has not already "opened the possibility" of anything.

The BMA has expressed concerns about the impact which TTIP might have on NHS procurement and whether it could lead to the reassignment of medical services which had ALREADY been outsourced. These concerns were passed on to the EU's negotiators by Conservative MEPs.

So insofar as "genuine concerns exist" they relate to the NHS's procurement and to services which are part of the 6% or so of NHS spending things which have been privatised already.

There are no valid reasons to believe that TTIP could directly lead to new privatisation.

The issues which do exist have been raised in parliament and were discussed during an excellent debate on TTIP in the House of Commons in 2014, which you can read on the Hansard website at http://www.publications.parliament.uk/pa/cm201314/cmhansrd/cm140225/debtext/140225-0002.htm.

During that debate the minister who spoke on behalf of the government - Ken Clarke - responded to those who were asking whether TTIP might lead to additional privatisation of the NHS as follows:

"I can assure the hon. Lady that nothing in the agreement would open up access to the national health service beyond what is already permitted, and what was permitted under the previous Government. Overseas suppliers are already able to offer hospital services and health-related professional services through a commercial presence here. The important thing for anyone who engages in the provision of professional health services and health care companies in this country is that they have to comply with UK standards and regulations in just the same way as British health care providers, and, as I say, those standards will remain under the sovereignty of this country."

The EU has published some details of their negotiating position on TTIP and the details they have published online here relating to how the agreement might affect public services includes the following:

There is no realistic possibility that TTIP or any other EU trade agreement will force a British government to privatise a part of the NHS, or any other public service, that it did not wish to privatise.

Hence the "Leave.EU" suggestion that a vote to remain in the EU might result in additional privatisation of the NHS represents either inexcusable mendacity or gross ignorance.

There are intelligent people who support the "Leave" case some of whom are putting forward arguments which deserve to be taken far more seriously. The sort of scaremongering nonsense described above must be a great embarrassment to them.
Posted by Chris Whiteside at 10:01 pm