On left and right in politics

WARNING - political anorak post, Do not read unless you are seriously interested in the intellectual side of politics.

The trouble with referring to politics using terms like "left wing" and "right wing" is it attempts to put into a small number of boxes or a single-dimensional axis people's position on a whole range of issues which would work better when viewed in at least two dimensions.

One of the most famous two-dimensional approaches is the "Political Compass" approach which ranks people left to right horizontally based on how much they support the free-market or economic liberty with a vertical axis based on how socially liberal you are with authoritarians at the top and those who are socially liberal at the bottom.

Of course, that is not perfect either as the current attempts by various actors in the Conservative leadership to claim the mantle of Margaret Thatcher demonstrates, with one group claiming, correctly, that she believed in low taxes and another pointing out, equally accurately, that she believed very strongly in "sound money" e.g. not spending more than you have coming in or borrowing more than you will be able to pay back.

"On the confusion of trying to follow UK politics with people point blank refusing to discuss candidate position in 2 two dimensional politics with anything other than a Left-Right axis."

With the posts is an image of how politicians who would be described in various ways from "hard right" through the centre to "hard left" might appear on a Political Compass type map.

It's not perfect but there is enough truth in it to make it interesting. And it illustrates why some people find it impossible to give a clear answer, and others get into debats in which neither can understand the other, on questions like which of Rishi Sunak and Liz Truss is more "right wing." 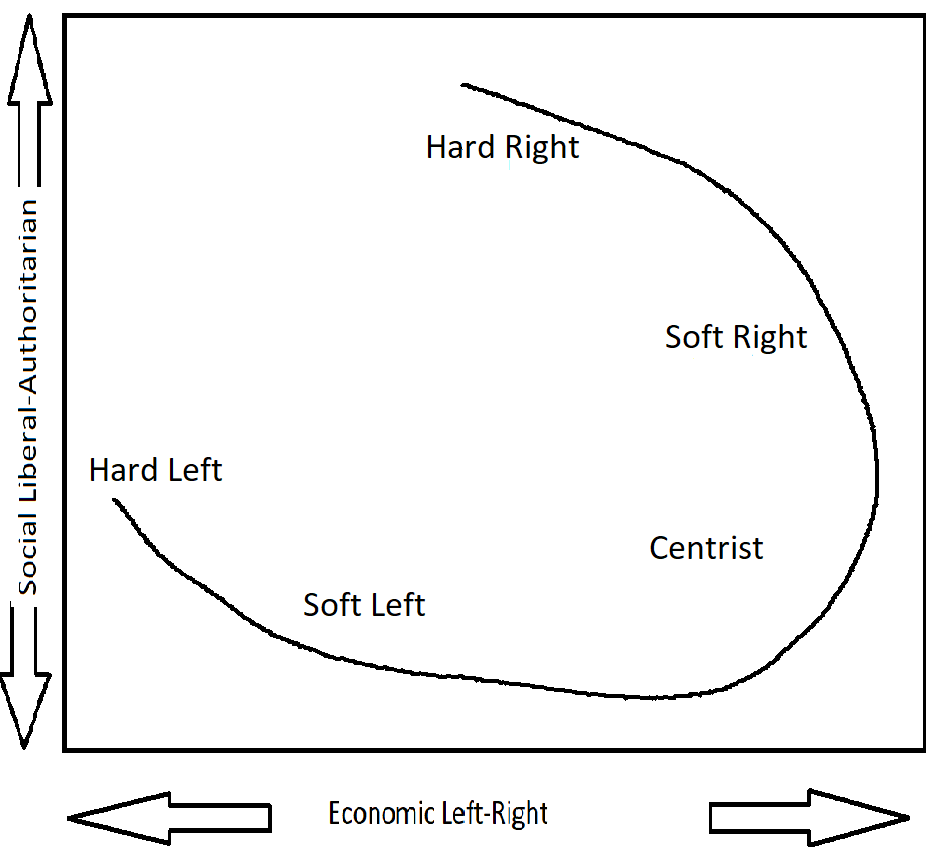 The thread suggests that UK politics a single "left-right" axis when translated into the Political Compass direction becomes a sort of "weird tilted horseshoe" in which, quote,

* the 'centre' is somewhere in the Liberal-Right quadrant

* the Soft Right is more Economically Right than the Hard Right

The threat includes an assessment of those who stood or seriously considered standing for the present Conservative leadership election on a "Political compass" map in which the centre is not the centre of politics for UK citizens as a whole but among Conservative MPs, and it looks like this: 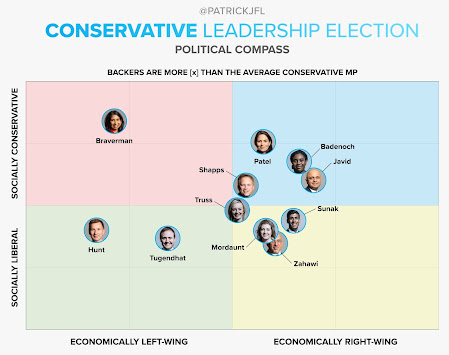 Not sure I go along 100% with everything in the thread or with their positioning of the candidates, particularly in that not all of them set out their pitch in the election quite where most of us might have put them based on their recent records in government. (Those people could legitimately come back and respond to that point that they were bound when serving in government by collective responsibilty, but their campaigns today are based on where they now think the country needs to go tomorrow.)

But it was certainly a thought-provoking thread ...

Posted by Chris Whiteside at 10:34 am