Who would have been the best leader at Agincourt?

Today is of course, the 600th anniversary of the Battle of Agincourt, when Henry V rescued himself from a campaign which was strategically a total mess by means of an extraordinary display of tactical skill and extreme ruthlessness, and by making use of the devastating power of skilled longbowmen.

Earlier this year, a couple of months before the General Election, a Survation poll on behalf of the Mail on Sunday asked which of Britain's then political leaders voters throught would have been best qualified to lead England's Army (I do mean England) against the French at Agincourt.

The result was interesting ... 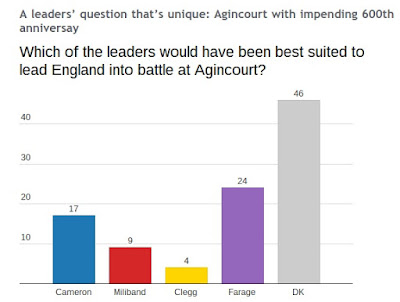 Nearly half of respondents ticked the "Don't know" option but of those who did express a preference the plurality opted for Nigel Farage.

There was, of course, a time when a record of defeating the French in battle was a great asset when standing for political office in Britain, witness that the Duke of Wellington became Prime Minister. However I suspect the result of the election proves that the person regarded as best qualified to put the French to the sword on the battlefield might not be the best suited to use diplomacy to negotiate with them in peacetime ...
Posted by Chris Whiteside at 9:30 pm