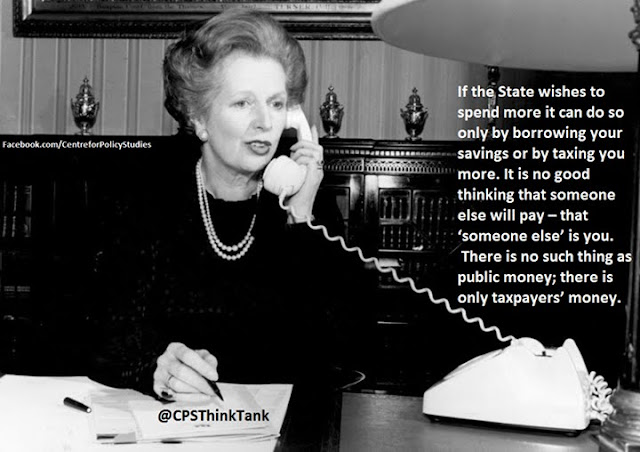 What an are you are

"What an are you are"

Doesn't even qualify as an epic fail, just a silly one.

Looks like standards are slipping in the Momentum troll factory - they're using the sort of person who can't write a childish insult consisting of five one-syllable words without screwing up.

The first thing any person really needs to know is that the government has NO money. In order to spend money on things the government first needs to raise it. To do this they really only have one option, that is to tax the citizens the country. In other words every single penny the government spend is a penny that has been taken from the people in tax.

that is why it's called tax payers money.

Many people will say at this point they can borrow money, and this is perfectly true. There is however a bit of a flaw in this.

You see when you go to a bank, or a building society, or a pay day lender, or even a dodgy loan shark and borrow some money, you are on the hook for it. Meaning you repay the loan and interest. Usually, if you cant pay then you end up in legal trouble and things get repossessed, in the case of the loan shark you end up feeling very sore and are still on the hook.

Its not a difficult concept to get your head around. Though the leftists seem to have a real problem doing so.

Whatever you say about Margaret Thatcher she understood this and she made a real effort as Prime Minister to govern in a way that reflected it.

Britain has a very dangerous level of national debt, which is still going up, because Gordon Brown was too ready to borrow and getting borrowing down to a merely dangerous level rather than a lethal one took most of a decade - and the task of reducing it to where it should be is still not done.

Even now borrowing is seen as too easy an option by almost everyone, even by some Conservatives, and even more so by most people in all the other parties.

Doesn't your brand of Capitalism depend on people get in to debt and becoming subservient wage slaves?

When people take on more debt than they can easily manage, that isn't just bad for them. The stress it causes them is makes them less healthy, less able to devote imagination and energy to constructive and useful pursuits, and therefore usually less effective employees, so it's bad for their employers and for the capitalist system.

No responsible person should encourage anyone to take on debt which they will not find it easy to repay or service, and capitalism does not depend on irresponsible lending or irresponsible borrowing.

Any company which wants "subservient" employees rather than people with imagination and drive is not going to be well suited to the needs of the 21st century. And frankly, I'm not any more impressed with someone who jumps on the basis of zero evidence to the false idea that people with different views to theirs thinks like that than I would be with anyone who actually does think like that.

Something else the leftists fail to understand is the free market.

Again its not a difficult concept. People will perform work and do things if you pay them, its not hard. For example, you want your grass cut, i will cut your grass if you pay me £10. You dont have to take my service if you dont want it, you can cut your own grass and I wont be "offended".

If you want something doing you pay for it to be done, if you dont want it doing then you dont have to pay.

Honestly, what is so difficult here?

"Capitalism does not depend on irresponsible lending or irresponsible borrowing" - True, but for Capitalism to thrive it does hence the mess the global economy is still in.

Jim is talking sense - the individual who seems reluctant to sign his or her name is talking complete and utter nonsense.

Far from helping capitalism to thrive, irresponsible lending undermines the entire system. For example. it was one of the principal causes, indeed arguably the main cause, of the 2008 crash. And many others.

So it didn't help capitalism to thrive, did it?

That is so obvious that I am almost embarrassed to have to point it out.

Capitalism works best when money is lent responsibly for projects which generate a return to both entrepreneur and investor and to people who can afford to pay the interest and whose assets will always cover the principal.

Stupid behaviour is not rewarded under capitalism or any other system.

Hence the mess the global economy is still in.

Sorry but "Stupid behaviour is rewarded under capitalism", if it wasn't irresponsible lending would have been eradicated. Why else would debt levels be higher now than in 2008? institutionalised global stupidity.

let me explain this.

You sell me a Powerdrill for £100, no guarantee nothing, I fail to check over the product and it breaks the first time I try to use it. You see its me that loses for being so stupid.

I open a business selling widgets to customers, they find the quality of my widgets is not so great, this means they go to other widget sellers instead because I have been stupid and tried to fob off the customers with low quality stuff my business folds.

Capitalism in its true form depends on providing high quality things at as low a price as possible. It absolutely depends on willing trade.

Take e-bay. Now in the early days people thought that there would be a business for policing it, but it was very quickly found that people were trading very fairly, the main thing that was policing the sellers was the reputation or reviews. a seller with a bad history and a lot of bad reviews tends not to do so well on e-bay. The market polices itself.

"The market polices itself." - The market consumes itself and who has to bail it out, without fail it is the taxpayer again and again.

If a business fails then no one bails it out, come on, who bailed out woolworths? The business simply failed. The market cant conume itself, its quite simply not possible. Its only when governments interfere that things get pear shaped.

Unless of course mr/mrs/miss too scared to type a name, your definition of "capitalism" means banks, and if that is the case, then you really do need to look at the difference between "capitalism", "crony capitalism", and "corporatism"

I would agree with you on many things regarding what money is and from where it comes, but I honestly don't think you would understand why. You clearly fail to understand what capitalism is.

Perhaps time to read up on a few things and come back next year, make a coherent argument, then we can talk? any way, have a good holiday season, hope you enjoy, and the offer of a polite meaninful debate is up to you.

I think Jim has the better of the argument here.

We are talking in huge generalisations here, but for stupidity to actually be rewarded is the exception rather than the rule, under capitalism or any other system. It is more often punished.

Most human beings sometimes make stupid mistakes and most of us have the capacity to learn from them.

Stupid behaviour is only subject to extreme Darwinian pressure when it is literally fatal or has seriously prejudicial consequences for the ability to reproduce. This does put downward pressure on the incidence of stupidity but, alas, it is proving depressingly slow at eliminating itself.

It is very irritating for many people - especially those who have lost their jobs, pension, or savings - when they see the people who messed up walking away with a golden handshake, but although we may see the settlements imposed on such people as being far too light - a view with which I would often concur - don't kid yourself that people running private sector companies pay no penalty for failure.

As a general rule the difference in reputation and financial reward as between those who do a good job or a bad one is far higher in the private sector than in too many parts of the public sector - though to be quite candid I would like to see that differential increased in both.

Nevertheless, though we are talking in huge generalisations here, for stupidity to actually be rewarded is the exception rather than the rule.

Here is a Ted talk, that really does explain how the free market does work, in an area where it cant possibly be policed. I am not suggesting you go out and start shopping on drug sites here, but it really does stress the point on how the market does indeed police itself.