Quote of the year

“One of the most pathetic—and dangerous—signs of our times is the growing number of individuals and groups who believe that no one can possibly disagree with them for any honest reason.” 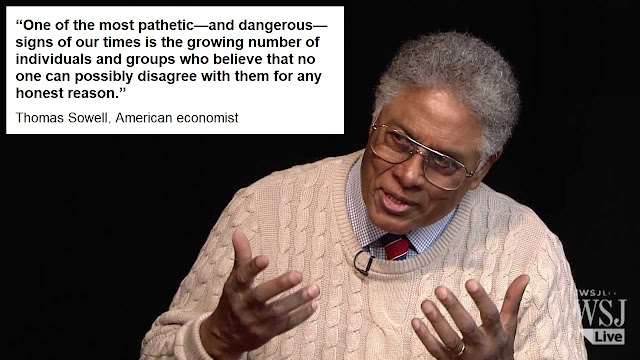 This quote is extremely topical in both Britain and the USA in 2018 and especially relevant to all sides in Britain's current Brexit debate.

By all means disagree with those who want to follow a different path but accusing anyone who disagrees with you of being a traitor, or a racist, or an extremist, or dishonest, or saying that everyone withy a different view should be slung out of your party, is unhelpful and harmful.

This applies whether it comes from leavers, remain supporters, from advocates of a hard or soft Brexit, from the left or the right, whether the person making the accusation is a member of the ERG,  a journalist like Janet Daley in the Telegraph, the Chancellor, a backbench MP like Anna Soubry, or from the left of politics who are just as bad.

No specific course of action has a majority in parliament or the country and somebody will have to compromise or Britain faces a very bad outcome. Refusing to recognise that those who support a different path honestly believe they are seeking Britain's best interest is a path to making that necessary compromise impossible.
Posted by Chris Whiteside at 9:00 am