All the results of Thursday's elections have now been declared.

In Cumbria scheduled County and district elections were postponed for a year because of local government reorganisation but we had the PCC election and a rich crop of by-elections.

An illustration of how complex the tapestry was came from Workington St Johns where the same two candidates had transposed fortunes in two elections in the same general area.

Because of the sad death of the late Joe Holliday, whose sixty years - sixty years! - in local government started as an employee, was then elected as a Labour councillor and finally became an Independent one, there were by-elections for the seats on both Cumbria County Council and Allerdale Borough Council which he had represented.

Deb Garton gained the St Johns & Great Clifton division on Cumbria County Council for the Conservatives, while Anthony David McGuckin gained the St John's seat on Allerdale Borough Council seat for Labour - which I believe was Labour's only gain in Cumbria last week at county or district level. Labour also held the Whitehaven Central by-election, the Hindpool seat in Barrow, and narrowly retained the Cathedral and Castle seat in Carlisle, and that was the sum total of Labour wins at county or district level in a bad electoral week for Labour in Cumbria.

Lib/Dems candidates were elected to three seats on South Lakeland District Council but harvested a bumper crop of very poor results in the rest of the county.

Unsurprisingly the Green policy of shutting down the main industry which West Cumbria depends on and opposing the main current opportunity for some new jobs went down like a lead balloon with voters in the West - none of their candidates in Allerdale did well and they didn't even put up candidates in Copeland or Barrow but in South Lakeland it was a different story and they will be pleased with the gain they chalked up in Ulverston.

The most significant win for the Conservatives in Cumbria last week was the one county-wide election in which Police and Crime Commissioner Peter McCall was re-elected with a truly impressive 53.5% of the vote, a score which made a second round unnecessary.

On Cumbria County Council the Conservatives increased our number of seats by one, winning three out of the four by-elections. We gained St Johns & Great Clifton from Independent as described above and Cockermouth North from the Liberal Democrats, while holding the Brampton division which had been vacant as a result of the death of the late Lawrence Fisher.

The main disappointment for the Conservatives was losing Ulverston West to the Greens by just 16 votes.

But overall we are up from 37 seats on the County Council to 38, which makes the Conservatives by far the largest group on the council, even though we are locked out of any role in the \administration by an alliance between two parties which received fewer votes put together than the Conservatives did in 2017.

Congratulations to all the successful candidates of whatever party (or Independent) especially my new Conservative colleagues on the county council, Catherine Bell, Deb Garton, and Mike Mitchelson.

Here are the full results for the CCC by-elections held last week. 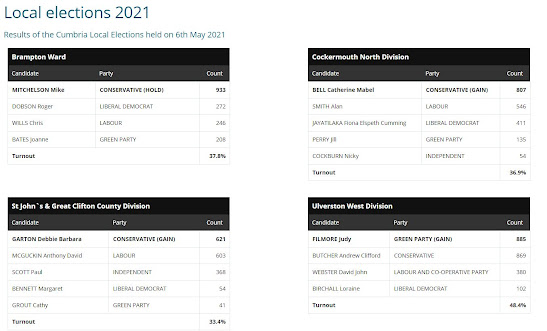 Posted by Chris Whiteside at 12:39 pm