Today I became one of 24 million, 839 thousand 906 people in the UK who have had at least one dose of an approved, tested, safe and effective COVID-19 vaccination. 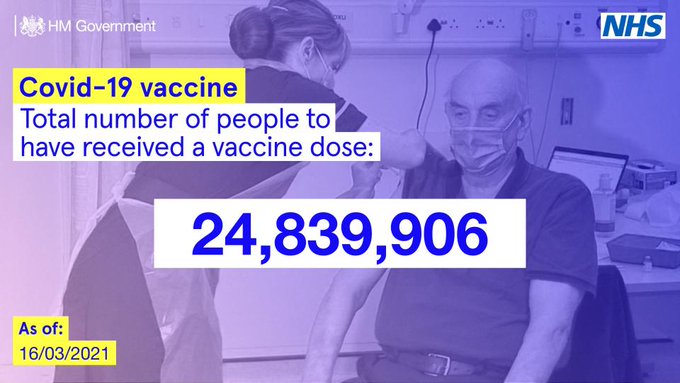 Britain's vaccination programme has been an extraordinary success – with over 40 per cent of adults across the UK now having received their first dose, helping to cut infection rates and reduce the spread of the virus.

Over 26 million vaccination doses have been given across the UK. On Saturday 13 March, we administered over 564,000 vaccine doses – the second highest daily total on record – and we are averaging about 2.5 million vaccines a week.

People aged 56 to 59 are now being invited to register for their COVID jab. This latest invite has been sent after more than eight in ten people aged 65 to 69 took up the offer of a jab.

Over half of people with underlying health conditions have now received their first vaccine dose. To help boost this take-up rate further, the NHS is texting millions of vulnerable people urging them to get their jab, with around two million invitations sent out over the weekend.

The vaccines being issued are safe, effective and will help us get back to normal.

UK Scientists have confirmed that the evidence available does not suggest that the Oxford vaccine causes blood clots. I had the Oxford vaccine this morning in the certain knowledge that even if  the vaccine really had caused the blood clots to which some European governments are over-reacting - which I don't believe, as there is zero evidence that the number of people with them has increased  - I'd still be improving my chances of having plenty of years of healthy life left by taking the vaccine.

Only a few weeks ago COVID-19 was killing orders of magnitudes more people in Britain every day than have been found with these blood clots.

The vaccines are not just keeping us from dying - they are also giving us a route to getting our lives back. And we will get our lives back this year.

But I have not forgotten that I and the other people vaccinated this week will still have to follow social distancing rules and take care. It takes several weeks for the immunity conferred by the vaccine to kick in. 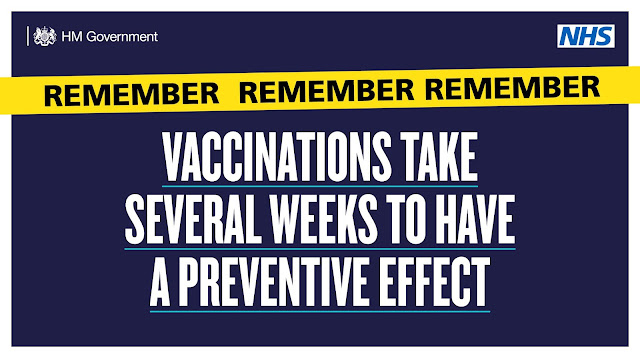 Posted by Chris Whiteside at 10:00 pm