Down to the wire

The final polls suggest that the EU referendum is looking very tight tomorrow.

Heaven only knows what is going to happen. Like most people, I thought the General Election last year would be much closer than it was, although I was expecting the Conservatives to sneak back in: I knew we had a chance of a majority but did not expect it.

This time the pollsters have an even harder job getting it right because there has not been a really equivalent vote for 41 years.

So it is possible that the polls and expectations could be completely wrong and one side could be heading for a big win.

My gut instinct, however is that it is going to be very close indeed and that is what the polls also show, as the table below (produced by Mike Smithson of Political Betting) indicates. I think this one is going right down to the wire and every vote could count. 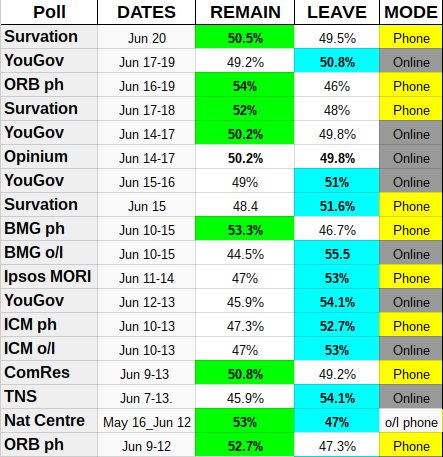