What can my quote of the day be?

I considered posting Sir Robert Walpole's 1739 quote at the start of the "War of Jenkins' Ear" but have decided that would be far too negative and could be seen as failing to respect the verdict of the people.

I considered quoting Dick Tuck's famous concession speech but it has the same problem.

I considered quoting Juliet's line from Romeo and Juliet about parting, but at the moment I am feeling a bit numb - indeed, stunned, though not surprised - rather than sweetness or sorrow.

One person tweeted yesterday that we would shortly find out who would have to make their promises work and who could spend the rest of their life saying "I told you so." But actually, I have no intention of spending the rest of my life saying that, I want to make this decision work.

This referendum has shown that Britain is a divided country. About 48% of us did not want this result. But we must ask ourselves why it happened.

I believe that today's result was the consequence of decades of paying too little attention to the hopes, fears and concerns of too many people, and the only way to rectify that was to start listening to the people, whether we like what they say or not.

And so my quote for today is John Voight's quote on democracy. 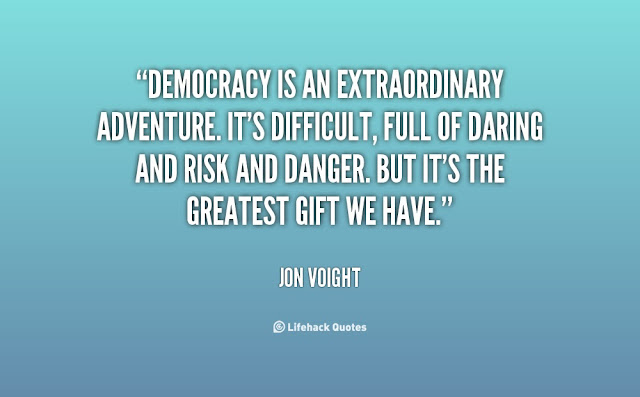 Posted by Chris Whiteside at 6:26 am