At the moment I greatly distrust all opinion polls.

I presume that the fieldwork for this one in the Sunday Post suggesting 59% support for Scottish Independence must have been taken while half the country was in a state of shock at the Brexit vote and may not reflect what people will think when they have all calmed down - particularly given that where the oil price is at the moment an independent Scotland would have a massive hole in it's budget. 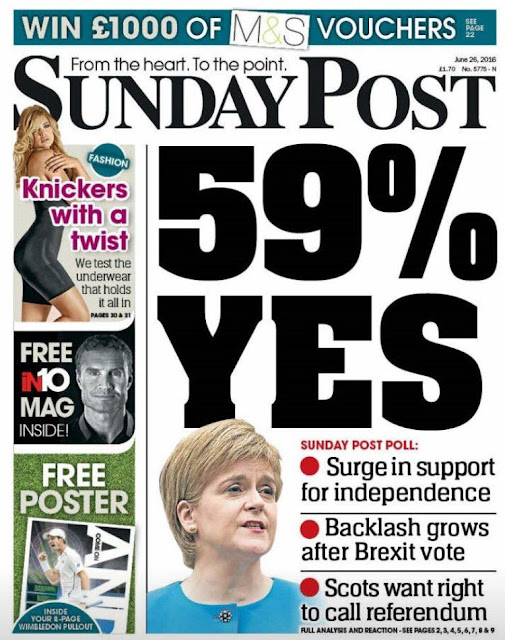 With no majority in the Scottish parliament it is by no means certain that Nicola Sturgeon can call another Indyref and neither is it certain that she can win one. There are some strong arguments in a Telegraph piece here by John McTernan that a second Scottish Indyref is not inevitable.

There is also apparently an EU report which says that Scotland cannot stay seamlessly in the EU by voting for Independence from the UK before Britain leaves the EU and applying to stay in: they have to leave and rejoin  Which makes the currency issue even more difficult.

Goodness knows how that will play out, if true. Robert Peston says he will ask Sturgeon about this at 10am tomorrow on ITV.

However, almost every argument for the preservation of the Union is identical to, or has major points of similarity with, arguments which 52% of UK voters rejected on Thursday.

I think those who want the British union to continue to exist should think very hard about how we cam make sure Scots feel that they are listened to, prosperous and able to control their own affairs within the UK.
Posted by Chris Whiteside at 10:57 pm

Just my opinion, though I don't think Scotland could meet the financial criteria of article 49 as an independent nation at least not in the next decade or so. Then of course are the issues of committing to join the Euro, and schengen. I just can't imagine the other 27 would all say yes. Scotland would be seen pretty much as another Greece.

I think there is a real threat to the Union from the SNP but it is by no means inevitable that they will succeed in pulling Scotland out. It would be a mistake either to panic or to ignore the issue.