Of medical staff and the NHS

Over the years we have consistently failed to train enough British people as medical staff and in consequence have had to recruit more from all over the world.

I believe we should train more British people as doctors, dentists and nurses. But we cannot do this overnight.

Yesterday I saw this picture of some of the thousands of foreign nationals who work in our NHS - it was posted of course, in the context of the EU membership vote. 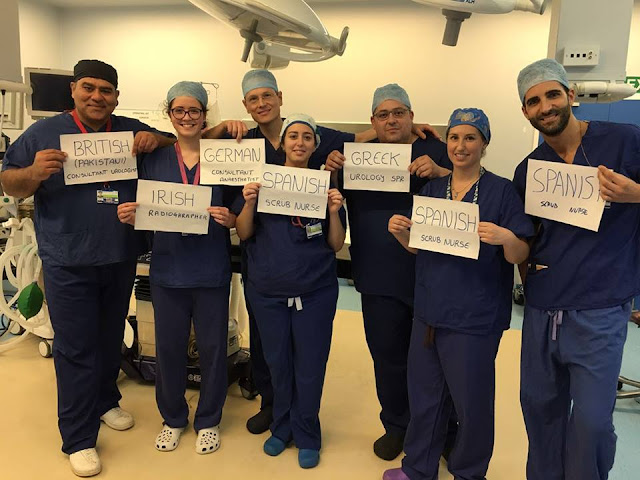 There are a lot of different figures floating around about how many doctors who were born, qualified or have citizenship of other countries work in the NHS. I looked first at the "Full Facts" fact checking website and their page on the subject which you can read here. According to "Full Facts"about 36% of doctors and 23% of GPs in the UK qualified abroad. I presume some of these now have British citizenship, as they also say that 24% of NHS doctors are foreign nationals. Another fact checking site reported that about 10% of NHS doctors and 4% of nurses are from the EU.

I hope whoever becomes Prime Minister, when they are negotiating with the EU the exact terms of Britain's departure, will bear in mind the enormous contribution that health ...service staff who are foreign nationals, along with staff who are British citizens, have made to our NHS, and the manpower needs of our NHS.


I hope and believe that the majority of Leave and Remain voters alike will regard it as far more important to keep the promises the Leave campaign made about protecting and improving the NHS than the ones they made about immigration.
Posted by Chris Whiteside at 8:30 am

Quite an informative post and its right that foreign doctors have always played a significant role in serving NHS. Doctors working in the UK are also required to undergo appraisal and revalidation process and through http://www.licencetopractise.co.uk/ they can get assistance with it.